The five Miami Marlins players headed to the Toronto Blue Jays [right: RHP Josh Johnson, LHP Mark Buehrle, SS Jose Reyes, Utility man Emilio Bonafacio, catcher John Buck] are going to one of the world's most cosmopolitan cities to play for a team that figures to be far better than their old one. But for them, the move also comes at a price: a steep tax hike.

Florida has no state income tax. Ontario, on the other hand, is about to impose a new, higher tax rate on the rich. As a result, the trade will cost the five players a combined $8.4 million in lost income, according to an analysis by Robert Raiola, the sports and entertainment group manager at Fazio, Mannuzza, Roche, Tankel and LaPilusa, a New Jersey-based tax, accounting and advisory firm. ...

For the purpose of these calculations, Raiola assumed 5% agent fees; that 43% of players' income would be subject to Canadian taxes (subtracting road games and spring training); a 49.53% combined tax rate for Canada and Ontario; a 40.5% U.S. tax rate; and assumed the players have established residency in Florida with the Marlins. Raiola also factored in a partial foreign tax credit that the players can use on their U.S. returns, along with so-called "jock taxes," in which some states require visiting athletes to pay state income tax for each game they play there. 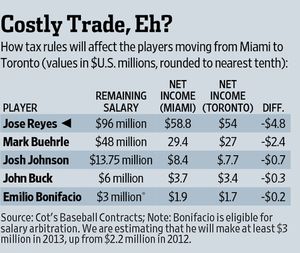 Listed below are links to weblogs that reference Tax Consequences of the Florida Marlins - Toronto Blue Jays Trade:

excerpt from Shi Davidi article on this issue---

In the wake of the megadeal leaking out, a few reports from U.S. outlets have suggested that Reyes (owed $92 million through 2017), Buehrle (due $51 million through '15) and Johnson (guaranteed $13.75 next year) are essentially facing substantial salary cuts because of the shift north.

"It's overstated in my mind," says Doug Hartkorn of Shimmerman Penn, a Toronto-based accounting and business advisory firm that works with some NHL players. "A lot of people assume you pay tax based on the team you play for. It's a lot more complicated than that."

At first glance, it does indeed look really bad, as in Florida players are subject to only the 35 per cent federal tax rate and no state tax, while in Ontario, the combination of federal and provincial taxes for income earners above $500,000 in 2013 will be a healthy 49.53 per cent ("the Super-NDP tax," as Hartkorn described it).

But once the factors of how the government's take of a person's income is calculated, what appears to be a 14.5 per cent hike more likely lands at 5-7 per cent.

Canada taxes based on residency, explains Hartkorn, meaning that provided players make their homes outside the country (which they do), only half their income is taxed at Canadian rates since only half their work is conducted here.

Then consider that in the United States, players pay a variable rate of state tax based on how many games they play in different locales, with New York, California and Michigan, for instance, charging a much higher rate than say Florida or Texas, which charge none. They also pay based on the rate of the state they live in.

That's why the adjusted hit more likely sits in the 5-7 per cent range.

As for what it means for the Blue Jays' new trio, using the seven per cent adjustment, Reyes will pay an additional $3.22 million over the life of his contract, Buehrle $1.785 million more, and Johnson another $480,000.

Nobody would be happy about such a hike -- let's be honest, it sucks for them -- but it's not the bank-breaking blow some are making it out to be.

Who knew that sports had issues with taxes.