Following up on Tuesday's posts:

The number of people taking the Law School Admission Test ... offered in October fell sharply, down 16.4% from the year before, reaching its lowest level since 1999. ... 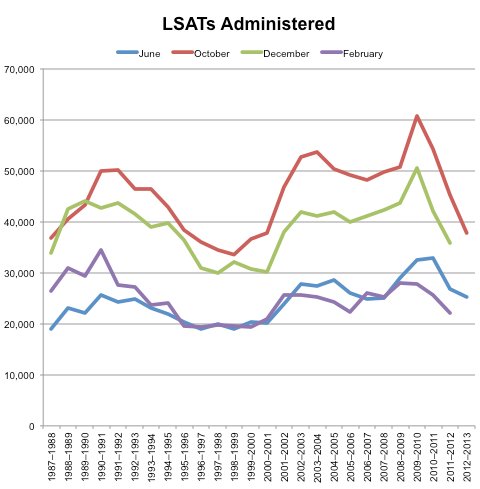 No wonder, then, that law schools are cutting the size of their entering classes. ...

[P]otential students seem to have wised up to the huge debt burden and poor job placement prospects. One recent paper actually suggests that law’s reputation for providing a risk-free career path has been a fiction for a long time. It notes that the legal market has become more crowded, with the ratio of the American population to American lawyers morphing to 252 to 1 in 2005 from 695 to 1 in 1951. The paper also estimated that, of the 1.4 million law graduates of the last 40 years, about 200,000 to 600,000 are not working as lawyers.

It is a good start, but a REAL plunge to half of historic enrollments would be much much much better. For our country.