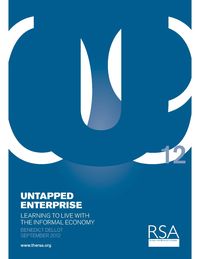 Much of tax law scholarship concerns how to improve tax compliance; in this literature, tax evasion is held out as normatively undesirable.  A senior researcher at the London-based Royal Society of Arts recently published a paper in which he argues that tax evasion in the UK might (actually) be a good thing.  In Untapped Enterprise, Benedict Dellot argues that the “informal economy” – those workers who do not declare their income for tax purposes – are an important part of the formal economy and that "formalization" itself is a process that occurs over the lifecycle of a business.  In some parts of the developing world, for example, the informal economy accounts for up to 90% of GDP.  The authors argue “If we rely too heavily on deterrence measures, we run the risk of derailing this[formalization] journey and preventing the entrepreneurial potential of thousands of hidden entrepreneurs from being realised.”

The study, of course, has some application limitations, but it’s an interesting read.  Should tax policy accommodate certain forms of “productive” noncompliance? Does it already do so?  I'd love to hear from some of our tax readers on this!

Listed below are links to weblogs that reference Henderson: Is Tax Evasion Normatively Good?:

Should tax policy accommodate certain forms of “productive” noncompliance? Does it already do so?

"De minimus" rules already do this. Non-compliance is also tolerated where the enforcement and/or compliance costs are higher than the potential revenue. The public benefits when compliance and enforcement costs are considered and reasonable Revenue Procedures are issued to define the limits of short cuts which the IRS is willing to accept on tax returns. Formal approval levels the playing field.

I love euphemisms to make people feel better about themselves. Illegal immigrants became undocumented workers, and now tax cheats are participants in the informal economy.

And, of course, people some refer to as drug dealers are simply undocumented pharmacists.