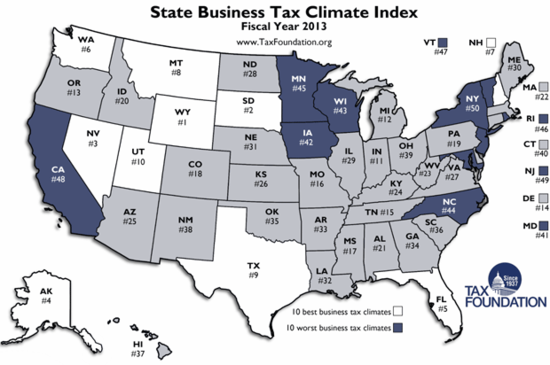 Listed below are links to weblogs that reference 2013 Business Tax Climate: Chilliest in Blue States:

As a 53 year old life long resident of California, the most amazing thing about our situation is the ability of the liberal chowderheads to deny that back when California was a conservative state,life was always getting better; now that the communist liberals have achieved so much destruction of the division of labor, and imposed their psychotic and megalomaniacal vision of environmentalism, they expect us to think things are better now than they were then because now we have gay marriage and hi speed rail.

We are friggn' doomed, I tell you. I cannot believe that people this stupid, this crazy, and this evil, are going to somehow pull of their flat spin and save themselves. Kalifornia is going to become so bad that people will start moving to South Africa to escape to a better life, relatively.

I don't think the study is keeping up with the evolution of state tax policies. In WA the state taxes businesses on revenue not profits. How can it be in top twenty let alone #6?

Further, WA now has a destination based sales tax. As a business, if you're out in Ephrata and you sell a product to a company in Seattle, you pay Seattle sales tax not Ephrata's. Further, for that honor you have to pay Seattle B&O tax, other taxes, and register as a business in Seattle, which means adhering to all of deep blue labor laws the people in Seattle can dream up. ( Employ at least five people? You must provide paid sick leave for all of your workers! )

I suspect these kinds of shenanigans weren't evaluated by the Tax Foundation.

take a look at the regional data in the PWC report...

Finally we have a definitive study which explains why Wyoming and South Dakota are meccas for so many businesses, including innovative corporations (especially high tech and biotech) and why places like California and New York fail to attract businesses and innovators.

An interesting side note is that the states with a more favorable tax climate have, on average, lower unemployment while the opposite is true of those with less favorable climates. The outliers are Nevada which, while listed as #3 has 12.1% unemployment and Vermont which is listed at #47 but has 5.3% unemployment.