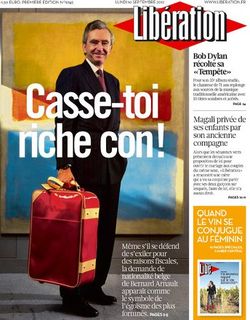 In response to the news that France's richest man has applied for Belgian nationality, the country's leading left-wing daily has declared: "get lost, you rich bastard!"*

The forthright headline, emblazoned across today's front page of Libération, is aimed at Bernard Arnault, CEO of the luxury fashion conglomerate LMVH. Arnault applied for Belgian nationality after the socialist president François Hollande proposed a new 75 per cent tax rate on earnings over one million euros. He denies he is trying to avoid tax, but Libération nonetheless condemns his decision as "a symbol of the arrogance of the wealthiest".

The headline is actually a play on a famous gaffe made by the former president, Nicholas Sarkozy, who muttered "casse-toi, pov' con" ("get lost, you poor bastard") at a member of the public who refused to shake his hand. The phrase subsequently became a taunt taken up by Sarkozy's left-wing opponents.

UPDATE: Arnault is now suing Libération, according to a press release from his company. Arnault, "has no other choice, given the extreme vulgarity and violence of the headline," it says.

Listed below are links to weblogs that reference Newspaper to France's Richest Man Leaving Country to Avoid 75% Tax Rate: 'Get Lost, You Rich Bastard!':