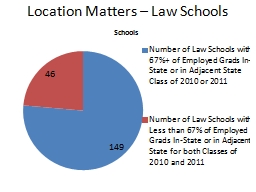 Over on our sister blog, The Legal Whiteboard, Jerry Organ (St. Thomas) examines NALP data from the classes of 2010 and 2011 showing that 2/3 of all employed graduates were employed in the state in which their law school was located and concludes:

Listed below are links to weblogs that reference Most Students Are Better Off Going to Regional Law School in State in Which They Hope to Practice (Even If Lower Ranked):