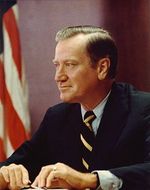 Prior to joining the Tax Court, Judge Train served as an attorney at the Joint Committee on Internal Revenue Taxation, United States Congress, from 1949 to 1953; as Clerk of the House Committee on Ways and Means in 1953 and 1954 and as Minority Clerk in 1955 and 1956; and as Assistant to the Secretary and Head of the Legal Advisory Staff at the Treasury Department in 1956 and 1957.

President Eisenhower appointed Judge Train as a Judge of the Tax Court of the United States on August 1, 1957, where Judge Train served until his resignation on July 31, 1965.

Following his service to the Tax Court, Judge Train was President of the Conservation Foundation from 1965 to 1969. He also served as Undersecretary at the Department of the Interior in 1969, as Chairman of the Council on Environmental Quality from 1970 to 1973, as Administrator of the Environmental Protection Agency from 1973 to 1977. He served as President and Chief Executive Officer of the World Wildlife Fund-U.S. from 1978 to 1985, and as Chairman of its board from 1985 to 1994.

In 1991 President Bush awarded Judge Train the Presidential Medal of Freedom, which is the nation’s highest civilian award, for his groundbreaking conservation and environmental efforts.

Listed below are links to weblogs that reference Death of Tax Court Judge Russell Train: