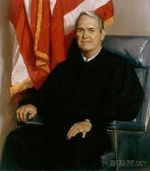 From the Tax Court:

Judge Hamblen served as Deputy Assistant Attorney General, Tax Division, Department of Justice, at the time of his appointment to the Tax Court. Judge Hamblen was appointed by President Reagan as a Judge of the United States Tax Court on September 14, 1982, for a 15-year term ending September 13, 1997. He served as Chief Judge from June 1, 1992, to May 31, 1996. Judge Hamblen retired on June 1, 1996, and was recalled as Senior Judge to perform judicial duties until June 30, 2000. Judge Hamblen authored 349 opinions.

Listed below are links to weblogs that reference Death of Tax Court Judge Lapsley Hamblen:

Jugde Hamblen was a true gentleman, in every sense of the meaning that that word used to have. Although he left the court over a dozen years ago, I am sure that there still are numerous employees and several Judges who knew him and were quite saddened by the news. My condolences to his family.