CBO: The Taxation of Capital and Labor Through the Self-Employment Tax 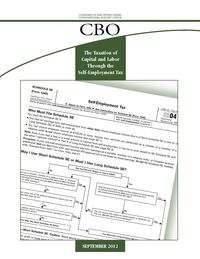 The Congressional Budget Office yesterday released The Taxation of Capital and Labor Through the Self-Employment Tax:

The Self-Employment Contributions Act (SECA) tax is paid mainly by certain small business owners. That tax on sole proprietors and owners of partnerships is often characterized as one that parallels the Federal Insurance Contributions Act (FICA) tax that employers and employees pay to fund Social Security and Medicare. The two taxes, CBO concludes, are not really parallel in the way that they tax capital income and labor income. (For people who are not self-employed, interest, dividends, rents, and capital gains are capital income, and wages and benefits are labor income.) The differences in the treatment of capital and labor income may prompt people to make choices that they would not otherwise make about self-employment or the organizational form of a business, thereby reducing the efficient allocation of resources.

Listed below are links to weblogs that reference CBO: The Taxation of Capital and Labor Through the Self-Employment Tax: