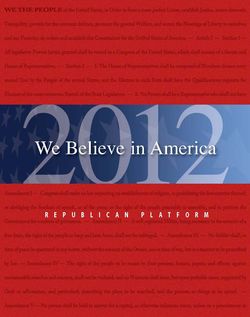 Tax Relief to Grow the Economy and Create Jobs

Taxes, by their very nature, reduce a citizen’s freedom. Their proper role in a free society should be to fund services that are essential and authorized by the Constitution, such as national security, and the care of those who cannot care for themselves. We reject the use of taxation to redistribute income, fund unnecessary or ineffective programs, or foster the crony capitalism that corrupts both politicians and corporations.

Our goal is a tax system that is simple, transparent, flatter, and fair. In contrast, the current IRS code is like a patchwork quilt, stitched together over time from mismatched pieces, and is beyond the comprehension of the average citizen. A reformed code should promote simplicity and coherence, savings and innovation, increase American competitiveness, and recognize the burdens on families with children. To that end, we propose to:

American Competitiveness in a Global Economy

American businesses now face the world’s highest corporate tax rate. It reduces their worldwide competitiveness, encourages corporations to move overseas, lessens investment, cripples job creation, lowers U.S. wages, and fosters the avoidance of tax liability— without actually increasing tax revenues. To level the international playing field, and to spur job creation here at home, we call for a reduction of the corporate rate to keep U.S. corporations competitive internationally, with a permanent research and development tax credit, and a repeal of the corporate alternative minimum tax. We also support the recommendation of the National Commission on Fiscal Responsibility and Reform, as well as the current President’s Export Council, to switch to a territorial system of corporate taxation, so that profits earned and taxed abroad may be repatriated for job-creating investment here at home without additional penalty.

We oppose retroactive taxation; and we condemn attempts by activist judges, at any level of government, to seize the power of the purse by ordering higher taxes. We oppose tax policies that divide Americans or promote class warfare.

Because of the vital role of religious organizations, charities, and fraternal benevolent societies in fostering benevolence and patriotism, they should not be subject to taxation, and donations to them should continue to be tax deductible.

In any restructuring of federal taxation, to guard against hypertaxation of the American people, any value added tax or national sales tax must be tied to the simultaneous repeal of the Sixteenth Amendment, which established the federal income tax.

Listed below are links to weblogs that reference Tax Planks in 2012 Republican Platform:

Taxes limit our "freedom?" Seems to me you're pretty free to drive the roads and bridges, collect your Social Security (which I'm sure you won't based on your astounding personal principles), and send your kids to public schools (which you probably don't because you want them to be programmed to be God-fearing consumers).

This every-man-for-himself insanity has to stop. This country is not exceptional, it's part of a world community that freaks like you refuse to become members of.

Did our inalienable rights extend to the genocide of the Native Americans, the enslavery of an entire race, or the internment of the Japanese?

Religion is insanity and insanity will destroy America.

I have been involved as a Tax Lawyer since 1976. No matter who is in power, the Tax law (including, Code, Regs, Cases and actual administration) on a Federal and State level simply gets more complex. The Reagan 1986 Code (Bradley/Gephart) did little real simplification. Since then, Congress has made sure that tax law and administration is increasingly complex and burdensome. I see no push for real simplification. Until then, we will continue to pay the huge opportunity cost associated with tax compliance.

I would like to read the article before commenting on it!!!

I see we are back to the "IRS Code." What exactly is the "IRS Code?" Is that a reference to the Treasury regulations or to the comprehensive Title 26 that was passed by the people's duly elected respresentatives and signed by President Ronald Reagan?

When did the elimination of tax on interest, dividends, and capital gains altogether get limited to only lower and middle-income taxpayers? Didn't the "Ryan Budget" exclude these from income for all taxpayers? That's what gave rise to the charge that Ryan's plan would reduce Romney's tax burden from the 2010 rate of 14% to 0.82%

It's the first time in memory that a Republican tax position hasn't been misrepresented here.