This article reports The Educational Diversity Project’s findings on two empirical questions: (1) Do students differ by race upon entering law school? (2) Do any differences contribute educational benefits to students, institutions, or society? Extensive quantitative and qualitative empirical data support the finding that a racially diverse law student body provides educational benefits. Many differences students present are associated with diversities of backgrounds, experiences, perspectives, expectations, and outlooks that are related to their race. Diversity fosters richer interactions and positive educational outcomes. Race contributes to the achievement of educational diversity that benefits students, their institution, and society. 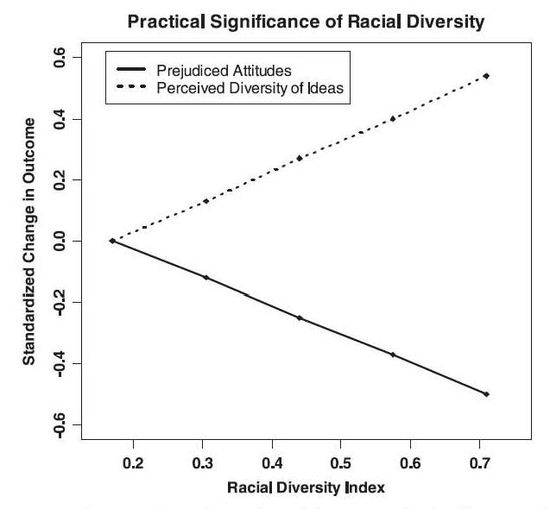 The underlying premise of the U.S. Supreme Court's precedent in Grutter v. Bollinger — which upheld the limited use of affirmative action in college admissions — is that students benefit from being in a racially diverse educational environment.

But there hasn't exactly been a wealth of social science research to support this theory, as retired Justice Sandra Day O'Connor lamented in a 2010 essay. As the justices prepare to take up affirmative action again, research has emerged that might help fill that gap.

A study titled Does Race Matter in Educational Diversity? A Legal and Empirical Analysis concludes that law students actually do benefit from racial diversity on campus and that law schools should work to maintain diverse classes. ...

The data show, resoundingly, that students of different races do come to law school with differences in experience and perception, Daye said. Perhaps more important, those differences translated into a richer educational experience overall, according to the surveyed students. Many students reported that they left law school with a deeper understanding of the law as a result of diversity among their classmates, Daye said.

Listed below are links to weblogs that reference Racial Diversity Enriches Legal Education:

Does anyone seriously think Thomas Sowell would be where he is if not for being a black conservative? What about Walter Williams? Or G. Marcus Cole? And there are many others. Just look at their peer reviewed / academic publication records and citation counts compared to their white male peers.

If you look at some of the (mostly non-minority) conservatives hired at Harvard in the last few years, it's pretty clear Elena Kagan was on a major conservative affirmative-action binge. Why do you think the Republicans didn't put up a fight at Kagan's Supreme Court nomination hearing?

Again, just compare the citation counts and publication records for the liberals and conservatives who teach and research in the same areas and are of the same race and gender and seniority level, and it's clear there's affirmative action for conservatives.

And a few schools--George Mason, Pepperdine, Baylor--hire almost exclusively conservatives / libertarians. There are no exclusively liberal law schools, nor are there any exclusively black law universities-even Howard University will hire non-minority faculty.

Not to mention all of the conservative owned media outlets that will publicize anything and everything any conservative academic with a pulse has to say. The WSJ editorial page and Fox News are basically on direct dial to the faculty at George Mason.

Conservatives have been discriminating against more qualified liberals while trying to appeal to liberals sense of fairness and diversity to get liberals to bend over backwards to find conservative hires.

Just how enriched to legal education were those who were deserving of a position but were kicked out because they were the wrong race for diversity, aka reverse discrimination? Those individuals are the ones paying the price for someone else's social cause. But, just go ahead and have no conscience on that and move ahead smugly with your claims of promoting fairness.

Ted Frank says it all in his response:

"The study relied on self-reporting of law students, and found that "Many students reported that they left law school with a deeper understanding of the law as a result of diversity among their classmates." Thus, the authors argue diversity should matter in admissions.

Farther down he makes another point that many of us have been making for years. If diversity is so valuable, why do we specifically focus on racial diversity, and within that on Blacks and Latinos? Are their contributions more valuable than those of other races? What about intellectual diversity?

Speaking from experience, my black law school classmates tended to have your generic liberal viewpoints. I added more diversity to the class as an outspoken libertarian than any of them did. I was also an older law student, past 30 - why doesn't that count as diversity? I guess to the powers that be I am just a typical white male...