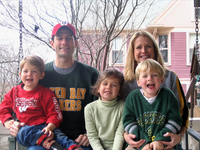 Born Janna Little, she is originally from Oklahoma where her mid-western values and his conservative politics were figurative bedfellows before they became physical bedfellows as husband and wife. She is a graduate of the prestigious (and expensive) Wellesley girls college. After obtaining her 4-year degree there she one-upped her sterling education by continuing on to attend one of the best law schools in the country, George Washington University. After graduating she became a high-powered tax attorney in the nation’s capitol of Washington DC. ...

She married Ryan in December, 2000 while he was just a babe in the woods during his very first term in Congress at the young age of 30 years old. They were married in her hometown of Oklahoma City. ... In short time Paul Ryan’s wife turned to a favorite activity of Republican wives everywhere: child bearing. The couple now have three children. The first born was a daughter named Elizabeth Anne Ryan. Two sons followed named Charles Wilson and Samuel Lowery Ryan.

Listed below are links to weblogs that reference Janna Ryan, Tax Lawyer:

TaxProf, why would you give blog space to such a neanderthal? This is a smarmy and intentionally insulting statement! On the other hand, I'd much rather have my country's future populated with children from these unions than from many others!

Its hard to believe that someone that works in the Washington Nat'l Tax office of PwC after law school = high-powered tax attorney.

I think those that run in the DC tax circles would disagree with that distinction.

You do realize the article that comes from is really infantile?

Thought y'all should know the Ryans are elite, wealthy, privileged and "out of touch."

Doesn't pay to be a Republican and a smart cookie. Espeically if you are a married Catholic female who likes being a wife and mom.

Girls' college? When was this written?

What on earth? The "bedfellows" line was so gross that I almost stopped reading. I now regret that decision to continue. This article has... issues.. and I don' think it gives enough credit to Mrs. Ryan, Republican women, Wellesly grads, or hey, even that "babe in the woods" who is now a candidate to be the Vice President.

If there is something wrong with having attended Wellesley, then consider our current Secretary of State.

There is nothing wrong with Wellesley. George Washington is a lame law school. Going there from a Wellesley means that she didn't do well at Wellesley (or bombed the lsat).

A google search reveals that George Washington University Law School was ranked 20th by USN for 2012. It also reveals that admitted students GPA and LSAT compare favorably with law schools ranked as high as 7th.