At least $21 trillion of unreported private financial wealth was owned by wealthy individuals via tax havens at the end of 2010. This sum is equivalent to the size of the United States and Japanese economies combined.

We consider these numbers to be conservative. This is only financial wealth and excludes a welter of real estate, yachts and other non--financial assets owned via offshore structures.

The research for the Tax Justice Network by former McKinsey & Co Chief Economist James Henry comes amid growing concerns about an enormous and growing gulf between rich and poor in countries around the globe. Accompanying this research is another study by TJN, entitled Inequality: You Don't Know the Half of It, which demonstrates that all studies of economic inequality to date have failed to account properly for this missing wealth. It concludes that inequality is far worse than we think. 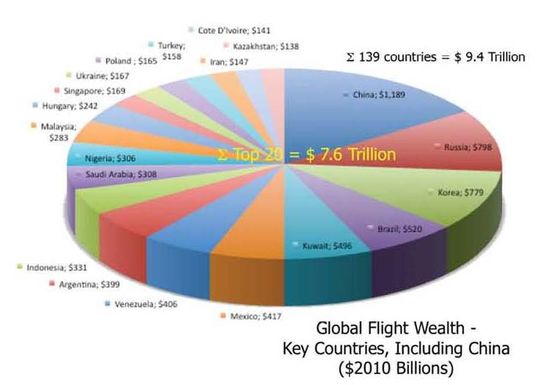 Listed below are links to weblogs that reference World's Elite Hide $21-32 Trillion From Tax Man in Offshore Accounts:

When poor people do it in a rich country, it's "black market."

When poor people do it in a poor country, it's "informal economy."

When rich people do it in a rich country, it's "tax evasion."

Whatever you call it, it means the government is heavy-handed enough that people are routing around it and finding their own solution.

A tax article whose first sentence begins "A global super-rich elite" is automatically disqualified as an objective analysis. The article can be summed up best with this quote within it:

"Closing down the tax loopholes exploited by multinationals and the super-rich to avoid paying their fair share will reduce the deficit. This way the government can focus on stimulating the economy, rather than squeezing the life out of it with cuts and tax rises for the 99% of people who aren't rich enough to avoid paying their taxes."

It's about class warfare, it uses an undefined and inflamatory "fair share" term, it contradicts itself by saying that more taxes from a "super-rich" will reduce the deficit and then maintain low taxes for ninety-nine percent (half of whom already pay no taxes) and than allow for even more government spending -- falsely asserting that more government spending will stimulate the economy...just like Obama's last stimulus and fails to mention that the higher taxes received from "the super-rich" wouldn't run the government for a week.

The numbers on this pie chart don't seem to match the numbers in the "pre-launch" report. Also, the outgoing head of the International Fiscal Association, at a tax conference in Miami recently, quoted data from BCG Global Wealth showing $7.8 trillion of "offshore wealth" with about 10% of that situated in the US, mostly from Latin America sources.