Which Law Schools Are Most at Risk for Missing Their Fall 2012 Enrollment Target? 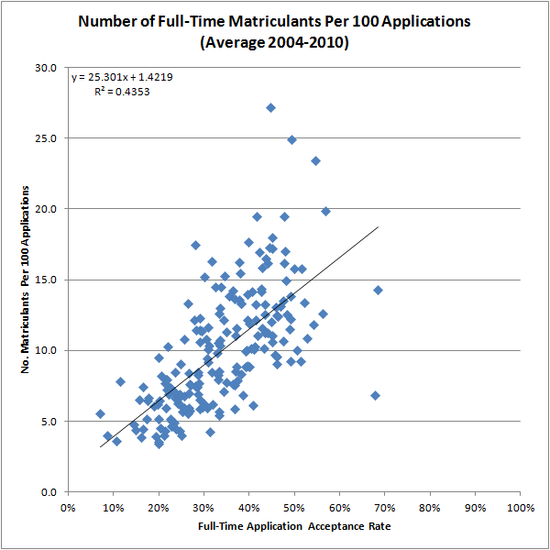 The average matriculants per 100 applications over this period is 10.0, and the average deviation is 3.4. This means, for example, that the highest average scoring law schools like Liberty University (27.2) and Regent University (24.9) are really out there. ...

The thing we want to know is which law schools saw matriculant/application ratios increase while their acceptance rates also rose to prevent an enrollment shortfall. Taking the annualized rate of change between the two years for both statistics, we get the following chart: 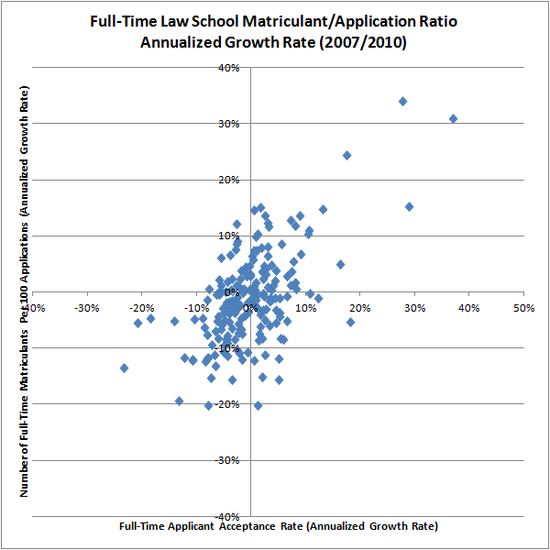 To interpret this scatter/splatter plot, a majority of law schools (118) in this period saw a decline in their matriculant/applicant ratio, and in a time of increased matriculants and applications, this means most law schools did well, as we'd expect. So which law schools are way out there in the upper right? Going from right to left:

Listed below are links to weblogs that reference Which Law Schools Are Most at Risk for Missing Their Fall 2012 Enrollment Target?:

Isn't it amazing how the quality of analysis has skyrocketed once the ABA liberated school data?

But, of course, that is exactly why they kept it imprisoned for so long.

Dominoes are falling and a nationwide multi-decade conspiracy involving some of society's central institutions is about to be exposed.

What factors would cause matriculation rates to be greater than acceptance rates?

Interesting. It would also be interesting to see what schools outperform the statistics (after adjusting for rank). Is it schools with low tuition? Is it schools in major metropolitan areas? Or perhaps schools with something unique to offer (strong clinicals, religious mission, public interest mission)? Hopefully they can provide the other side of this coin in their analysis.