Tough Choices Ahead for Some High-Ranked Law Schools

Following up on my previous post, The Competition for Law Students: Golden, Popular, Marginal, and Scavenger Law Schools (June 5, 2012):  American Lawyer:  Tough Choices Ahead for Some High-Ranked Law Schools, by Matt Leichter:

One, between fall 2004 and fall 2010 (the 2013 Official Guide was not online when this article was written), which schools in which parts of the country have full-time applicants been applying to? Two, what can law schools' acceptance rates and applicant yields tell us about law schools' futures in a time of dwindling applicants?

Here's the national picture for full-time law school applications, admitted applicants, and matriculations between 2004 and 2010. 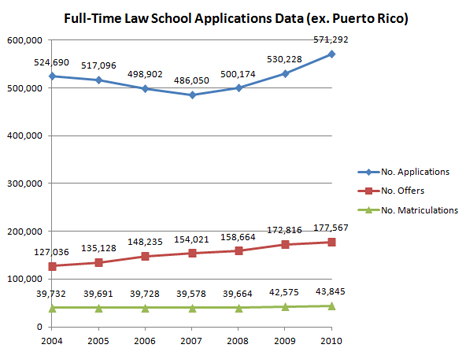 Much of the growth in the Southeast is due to the fact that since 2004, that region gained seven law schools, including Ave Maria School of Law, which moved to Florida from Michigan in 2008. That's 16% more law schools, much greater growth than elsewhere. ... [T]he media has missed the story about law school expansion in the South. The press should try interviewing deans in the Carolinas and Florida about whether their states need so many new law schools.

Update #1:  Bill Henderson (Indiana) has posted a detailed analysis of Matt's article on The Legal Whiteboard:  What Law Schools Lose the Most When Applicants Decline?:

Declining applicant volume, shifting yields, and highly informed consumers make it very difficult for law school administrators to lock in their LSAT and UGPA numbers, which schools generally fixate on because of U.S. News ranking.  This produces pain in one of three ways:

#1 and #2 may seem like the prudent course, but a central university won't (more likely can't) provide a financial backstop for more than a year or two, if that.  If the admissions environment does not change dramatically, which seems unlikely, some combination of layoffs, rankings drop, or closures will have to be put on the table.

Matt's ingenuity is on full display when he demonstrates, with data, the profile of the most vulnerable schools -- and its a far cry from the bottom portion of the U.S. News rankings.

Until August and September, when the wait lists finally clear, nobody really know the depth of market shift.  Only then can the budget holes be finalized.  Deans will then have candid conversations with their central administrations to answer the question, "Is this downward trend permanent?"

Analyses which rest on rigid assumptions about the student and institutional behavior as though they are simply part of the laws of nature underestimate both the capacities of the market to absorb and refract knowledge (some readers will recall that Hayek wrote lucidly about this in an earlier era); also underestimated is the strategic adjustments made by those of us who hard at work puzzling through these predicaments with an eye toward improving our product — that is, not only the well-being of our respective schools, but the education we provide to the next generation of lawyers.

Listed below are links to weblogs that reference Tough Choices Ahead for Some High-Ranked Law Schools:

Now is a good time to recall the fate of Georgetown Dental School (and others, like Northwestern, Emory, etc.), a storied, "top," 100+ year old school that was closed for reasons not unlike those facing law schools right now.

I can't wait to see 'top' law schools close and their faculty scramble to pay their bills.

May the closings be swift, I've got my popcorn ready for the show!

Also, I'd love to hear from the folks at UC Irvine - I bet the Irvine administration and alumni are looking for answers regarding the justifications for the bloated salaries and lack of corresponding tuition "revenue" to sustain the debacle.

Check out this old NY Times article on the dental school closings, wow!:

I remember my law professors had some very pithy bootstrap-themed things to say when my class complained there were fewer jobs than the school's stats had indicated. Something about having to work hard, compete in a changing environment, and adjust our expectations?

So now it's their turn and some of them won't get to keep their jobs. Can't say I'm all that sympathetic.

You need to keep in mind that a new equilibrium will be reached. If most schools do nothing, then all their LSAT scores will drop, and their rankings won't change. If a lot of them use the reduce-size strategy, those schools' rankings will rise, but the other schools will get more students since fewer students will get into the top-ranked schools.
If schools use the buy-top-students strategy, those schools will have to pay their professsors less and will lose on that dimension.

The last strategy is what a university probably would like--- give up on law school research and hire fifth-rate profs.

"eye toward improving our product"

Read - "Cook the books in new and innovative ways".

But *this time* (probably about 25 years too late) the blogs (and the knives) are out.

There is no better commentary on the state of legal education in America than the sheer number of alumni eagerly ready to commit matricide of their Alma Maters.