The Anti-Tax Movement and the Affordable Care Act 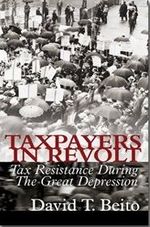 In the wake of the Supreme Court’s holding that the ACA mandate is a tax, we’re probably due to recall that while there was certainly staunch objection on the Right to the expansive new interpretations of the commerce clause that underwrote the New Deal, conservatives also had vigorous objections to its innovative taxation initiatives as well. They even got up considerable steam for calling a constitutional convention to deal with tax issues. David Beito wrote an important book on this that is well worth a look (Taxpayers in Revolt: Tax Resistance during the Great Depression (University of North Carolina Press, 1989)). ...

“When we adopted this income tax amendment, ... we departed from our constitutional method of taxation.” “For one hundred and twenty-five years, the Federal Government had levied taxes and they were always apportioned among the several States. Why do you suppose the Constitution is so specific and so explicit that Federal taxes shall be uniform and apportioned among the States? For one reason only. Our forefathers were determined to build a republic with equal opportunity and equal responsibility for each and everyone of us. They knew that the power to tax is the power to destroy, and they did not wish to have one group of citizens, or one part of the country penalized for the unfair advantage of another.”

It was the tax system as originally designed by the nation’s Founders that had helped make the United States “the richest, most powerful nation in the world.” Then “[w]e chucked our proven system of taxation out the window, and we passed the income tax. Gone was our uniformity, gone was our apportionment among the States. And with uniformity and apportionment went a great deal more—our fundamental American rights.” The income tax started at the relatively painless level of two percent, but had moved up to exorbitant, even confiscatory, levels ever since. With the barn door open, soon the rest of the horses were out too. ...

For many on the Right, these arguments have never lost their purchase. Their ideological frames tie the ACA directly to the ongoing economic meltdown. In this context, Romney – not in spite of his status as a proud capitalist, but because of it -- can play the hero to a well-tutored conservative movement.

Listed below are links to weblogs that reference The Anti-Tax Movement and the Affordable Care Act:

(1) That which is done under authority of an Amendment is not unconstitutional. The 16th Amendment is no less part of the constitution than the 1st Amendment. Personally, if we're going to cherry pick which amendments count, I'd like to disregard the 2nd.

(2) The 16th Amendment didn't affect the right of the federal government to tax income from labor. It only affected income from capital. Repealing the 16th, therefore, would mean that the advantages of income from capital would be increased beyond the already remarkable advantage of capital income that Warren Buffet likes point out to us.

(3) The power to tax in general is found in Article 1, Section 8. That power was granted because the Continental Congress, which lacked that power, nearly lost the Revolutionary War as a result of lacking two powers: Power to tax, and power to draft.

So let's not be silly.