Tax Foundation: Tax Equity and the Growth in Nonpayers

Tax Foundation:  Tax Equity and the Growth in Nonpayers: 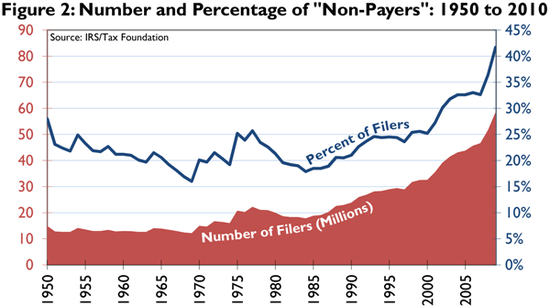 Listed below are links to weblogs that reference Tax Foundation: Tax Equity and the Growth in Nonpayers:

It's certainly true that social security and Medicare "payroll" taxes have long been viewed differently, as payments towards individuals' own (if admittedly) complex benefits. There's that famous lady, Ida May Fuller (close?) who -- of course, unavoidably -- received many times her own, modest, "early" contributions to Social Security, in the 1940s, upon her own retirement, as this "supplemental" retirement program was in its infancy. That's O.K., we had something like 15 workers for ever American retirees, back in the day (and the program had to start somewhere). We'll soon have three or so?

So, individual's social security and Medicaid tax payments, usually made via payroll tax withholdings, are quite different from individual's income tax payments, which are "for" more general federal government expenditures, such as defense, foreign aid, interest on debts, etc.

Personally, having large %s of Americans paying little or no income taxes seems troubling. They're paying nothing for defense, foreign aid, Medicaid, I guess (a state and federal "combo" program, funded differently than Medicare), or interest on our massive and ever-expanding debts. That just seems like bad public policy to me.

Everyone probably will have to pay more in income taxes, but almost everyone should pay some (with, again, social security and Medicare payroll taxes understood to be quite distinct).

And, oh by the way, we'll all probably have to pay more of these payroll taxes, too, as actuarial and demographic realities catch up with this "maturing" country of ours.

The single worst thing America is doing, fiscally, is spending the great-grandchilren's as yet un-earned and uncollected income (and, sure, social security and Medicare) taxes, now: five straight years of trillion dollar deficits! And still a very weak economic recovery.

Any constructive ideas to fix this out there?

The real danger is that the non-payers have no skin in the game. Representation without taxation. They will vote for whoever promises more handouts from the feds, since they are not paying for it.

Woody, Social Security and Medicare taxes are not designed to benefit the individual paying them. That money goes out to current beneficiaries as fast as it comes in, except for the portion used to buy a special series of Treasury bonds owned by the Social Security and Medicare Trust Funds. Congress spends the money from the sale of the bonds for general spending. The interest and principal of those bonds are due to be redeemed in the future through general revenues. That includes taxes on income such as investment income, which in theory isn't taxed for Social Security.

I am astonished by the naïveté of commenters who imagine that FICA revenues are in any meaningful way kept separate from general revenues. There has been no such separation for decades. Every wage-earner in the aboveground economy pays substantial Federal taxes – and (as noted above) every consumer in the aboveground economy pays sales, property, excise, and even corporate income taxes.

Here we go again... Social security is different. SS payments are theoretically for SS only and are not general revenue for the government to spend as it pleases. Low income people get more out of the program, on a net basis, than they put in. So SS payments aren't regular taxes--you are just paying yourself. Of course the government isn't saving and investing the SS funds like it should, but that's a different topic. There is a similar situation with Medicare.

Income tax goes is general revenue and isn't just the government taking your money so it can later send it back to you, minus a small administrative fee, like SS.

But it is still true that net-net many filers are not even paying any taxes with SS and Medicare included! Many are sent government transfer payments instead. Yes everyone pays sales tax and certain fees (state level), but the reality is that at the federal level, the entire funding of the government relies on fewer and fewer individuals. It's a bad system, and it shouldn't continue since so many are concerned with everyone paying his fair share.

This article reminds me of something I often think about -- the concept of a "Net Tax Payer."

Someone who pays $10 in income taxes is, strictly speaking, a "tax payer." They have at least *some* tax obligation.

But that person who pays $10 derives, at least in theory, some benefit from the overall operations of the government. Not necessarily direct transfer payments, but a general benefit based on the output of the government from all taxes paid.

My theory is that $10 payer -- bless their hearts, at least they pay something -- is really a "Net Tax User." That in fact there are very, very few true "Net Tax Payers" -- those who pay more than they derive in benefit in return. They are the ones who subsidize the rest.

We already know that the percentage of actual tax payers is shrinking and will soon be a minority. My guess is those who are really the contributors to the government engine -- those who pay in more than they get back in general -- is very small indeed.

The trouble is it's hard to quantify the "value" of government that accrues. It's not an "average" accrual ... I would argue I derive absolutely no benefit from the Department of Education.

Still, I think my point is valid -- that there are very few "Net Tax Payers" out there.

You have it backwards. When people mix social security and Medicare into the tax mix they're being dishonest (aka a red herring). Or are you willing to classify Social Security as a welfare program? It is basically a direct contribution retirement account. We are talking about federal income tax, the money gathered to pay for all other government and interest on debt. We are fast approaching a tipping point, when a minority of the population is paying for all govt programs (couple that with this nonsense about punishing higher income people with more taxes you have a recipe for economic stagnation).
Disclosure: I'm in that evil 1% and my effective tax rate is 36%(which mixes in self-employment tax) and 31% for the feds alone. I'm curious why that wouldn't be considered "paying my fair share"? And could someone tell me what number "my fair share" should be? I continually ask my leftist friends and they can't give me a real number. You'd think if they knew someone isn't paying "their fair share" they'd know what number would be.

Just to be clear: This startling statistic, that 41% of 2010's individuals' income tax returns filed in the U.S. had no income tax liability, this would not include a taxpayer who simply "over-withheld" (via her employer or through her own quarterly, estimated tax payments)? It's "two out of five" individual tax payers either not earning enough or having very large credits, deductions, etc. such that they owe zero in income taxes?

If any significant part of the 41% is just conservative, over-withholding (a.k.a, "loaning the government money, interest free"), that may be unwise (heck, it may be patriotic!), but it's fae less remarkable than the apparent point here.

john seward, SS and medicare are things the payer gets back in full (and then some). These are really forced retirement plans. Calling these taxes is like calling 401K contributions a tax.

Taxes are things that pay for the common good. From roads to infrastructure to military.

And the fact is 41% pay nothing to move the country forward.

When the president says business can't do it on their own, he's largely right. The top 20% are the only ones building this country any more.

Everyone else just exists.

But make no mistake, all businesses that employ people are likely in the top 20%, adn thus they already are paying the full freight.

John, social security and medicare taxes are designed to benefit the individual paying them. In fact, they are technically "contributions" to those programs and do not fund the U.S. general operating budget (when we had one before the Democrats took charge.) To say that they are the same thing as income taxes is not accurate.

We should be concerned that almost half of people who file tax returns are not "paying their fair share" when they pay nothing to support our nation or receive tax credits above what they paid in. That is a dangerous trend and should be discussed rather than excused.

Withholding for Social Security and Medicare is a contribution to a benefit.

Those who push back on this message -- that an increasing percent of tax filers have no income tax obligation -- are really trying to position for the next wave of their movement: that is, the elimination of remaining taxes on certain classes of people with the tax burden shifting to the few that remain.

Why should someone making less than $X thousand a year pay Social Security or Medicaid withholding? Or sales tax on milk? Or any tax whatever? And why draw the line at $X thousand?

The goal? Make the mythical 1% pay EVERYTHING for the remaining 99%.

It won't work, of course ... because the 1% will just shrug and walk away.

So, Mr. Seward, you are willing then to admit that Social Security is a WELFARE program, and is not a retirement plan?

These numbers demonstrate the need for a national sales tax on every consumer purchase.

Forgetting all about social security and medicare payroll taxes, as if they are not federal income taxes, is dishonest. When a low income person gets their paycheck, that money has been taken out and sent to Washington. It counts. It's a federal income tax.

Every time you buy something it costs more because the corporations selling them have to pay taxes. For poor people who have no ability to save, a large fraction of their income goes to pay this extra cost.

People who rent homes are charged more for rent because the landlord has to cover his property taxes.

Everyone who buys gasoline pays many taxes.

Telephone usage has surcharges. Postage stamps subsidize delivery to out of the way locations.

Many locations have sales taxes.

Some people worked for many years and paid income taxes and didn't receive benefits but are now earning much less income and receiving benefits. It is perfectly fair that people who paid taxes in good times should get benefits in hard times.

Doesn't this underestimate the number of non-payers of federal income tax, since some non-payers are not required to file a return?