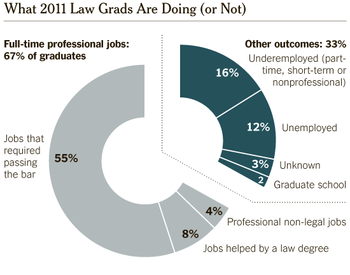 July is the cruelest month for recent law school graduates. State bar exams next week are make-or-break affairs, determining how many will be allowed to practice law. Those exams once set a graduate on the path to a lifelong career. Not anymore. A huge number of new graduates, if lucky enough to find work, will not be employed in legal jobs that require passing the bar.

Only 55% of 43,735 graduates in 2011 had a law-related job nine months after graduation, said William Henderson of the Indiana University Maurer School of Law, who analyzed recent data from the ABA. 28% were unemployed or underemployed. And at the 20 law schools with the highest employment, 83% of graduates were working as lawyers. At the bottom 20, it was a dismal 31%.

These numbers are far worse than jobs data going back a generation and should be a deep embarrassment to law schools, which have been churning out more graduates than the economy can employ, indulging themselves in copious revenues that higher tuitions and bigger classes bring in. A growing list of deans acknowledge that legal education is facing an existential crisis, but the transformation to a more sustainable model will be difficult and messy. ... Law schools will be crushed if they don’t remake themselves, said Frank Wu, dean of Hastings College of the Law at the University of California in San Francisco. “This is Detroit in the 1970s: change or die.”

Hastings, for example, is reducing the number of its J.D. students by 20% in the next three years. It trimmed staff jobs to cut costs, and it increased the teaching load of each faculty member by 20% to reduce the need for adjunct professors, among other reasons. But Mr. Wu says the school has no plans to cut the size of its full-time faculty or its compensation or tuition -- and tuition is an unavoidable problem.

As tuition has soared, so has student debt. Nearly 9 out of 10 graduates have sizable debt, with $98,500 the average for the class of 2010, or about $1,200 a month in loan payments over 10 years. Most schools and many students have banked on students’ being able to pay back enormous loans with ample salaries, but that flawed model is irretrievably broken.

It will be hard for any school to alter its cost structure without making substantial changes to its faculty and pay. ... The ABA, which accredits law schools, could help by allowing much more experimentation and differentiation among schools -- and by being much more skeptical of diploma mills. ... Law schools need to be pragmatic, ... finding ways to ensure that graduates can afford to take jobs where the salary is less important than the impact.

Listed below are links to weblogs that reference NY Times: An Existential Crisis for Law Schools: