NALP Research: Salaries for New Lawyers: An Update on Where We Are and How We Got Here: 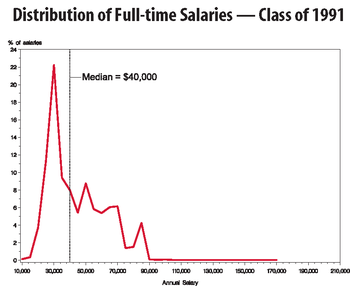 As the 1990s progressed, the curve maintained its basic shape, though salary increases at large firms gradually moved more of the salaries to the right of the $70,000 mark. ... That shape changed dramatically in 2000 as large firms increased their starting salaries to $125,000. Beyond just the amount of the increase, of more consequence for the salary distribution was how widespread the increase was. Suddenly nearly 14% of salaries were reported at $125,000, a proportion that can only be partially explained by an increasing percentage of jobs taken in large firms. The result was, for the first time, two peaks, with the other encompassing the $30,000 to $50,000 range. Thus, even though the peak to the left was now fatter and accounted for more salaries — 48% versus the 14% at $125,000— never before had a single salary so dominated the landscape. 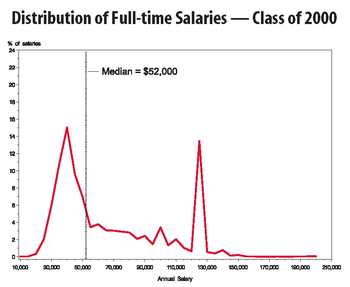 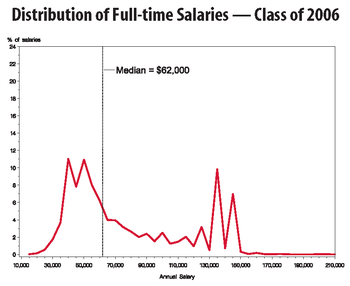 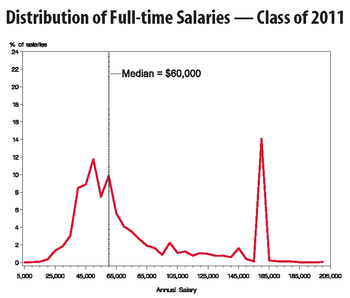 How the two peaks shift in the future remains to be seen. For example, will the right-hand peak revert to two peaks, one at $145,000 and one at $160,000? The return to a semblance of bell curve seems unlikely, however.

Listed below are links to weblogs that reference NALP: New Lawyer Salaries, 1991-2011:

The big, unspoken catch here is that these are REPORTED salaries of grads who actually 1) found work, and 2) found work in the legal profession. I imagine that if you factored in all grads, and all jobs (including no jobs), there would be a different curve.