Bill Henderson (Indiana) posted this chart on our sister Legal Whiteboard blog showing the dramatic change in the bi-modal distribution of entry-level lawyer salaries from 2007 to 2011: 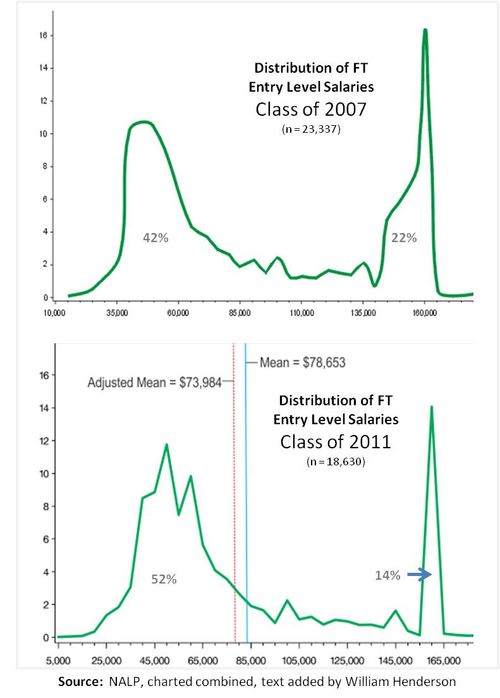 See Bill's entire post for his perceptive description of the problem, analysis of the structural changes occurring in large law firms, and long range solutions for law firms and law schools.

The median salary for graduates of the law school class of 2011 was $60,000, which was 17 percent lower than it had been just two years earlier, according to a new report from the Association for Legal Career Professionals (NALP).

But if you know anything about the bizarre market that is legal hiring, you know that the median salary tells you zilch.

Few people actually earn anywhere near the median (or mean). Instead, for years salaries for newly minted lawyers have been “bimodal,” meaning they’ve generally sorted into two levels: the $160,000 earned by first-year associates at big, white-shoe law firms, and the $40,000-to-$65,000 range earned by lawyers at smaller law firms, government jobs and so on. ...

The growth in that left-side hump reflects not only fewer $160,000 jobs, but also the creation of new second-tier, non-partner-track jobs. ... If you want to put a positive spin on these trends, you could argue that these new types of jobs are a potential benefit of the implosion in the legal hiring market: law firms, risk-averse as they are, realized that the one-size-fits-all, standard partner-track system was broken, and they have been getting more creative about establishing alternate work arrangements. The “work-life balance” benefits of these new jobs are certainly what the firms themselves emphasize, anyway. New and heavily indebted lawyers may not get the six-figure salaries they expected, but at least more choice in career path may be available to them later on.

Listed below are links to weblogs that reference Henderson: The Shifting Bi-Modal Distribution of Entry-Level Lawyer Salaries:

It is alo interesting to observe that the n has dropped 20%.

The high priced spread was 2600 jobs. I would guess that the famous T-14 law schools graduate about 3000 per year. So, there are not enough seats to go around. very intersting

This happens just as law school tuition has skyrocketed to the point at which you need a $160,000/year job to pay it back.