CBO: The Distribution of Household Income and Federal Taxes, 2008 and 2009

The Congressional Budget Office today released The Distribution of Household Income and Federal Taxes, 2008 and 2009 (July 2012):

For most income groups, the 2009 average federal tax rate was the lowest observed in the 1979–2009 period. ... For the lowest income group, the average rate fell from 7.5% in 1979 to 1.0% in 2009. ... Households in the middle three income quintiles saw their average tax rate fall by 7.1 percentage points over 30 years, from 19.1% in 1979 to 12.0% in 2009. ... The average tax rate for households in the 81st to 99th percentiles of the income distribution also reached a low point in 2009, about 4 percentage points below its 1979 level. ... In contrast, in 2009 the average tax rate for households in the top 1% of the before-tax income distribution was above its low point, reached in the early 1980s. ... The tax rate ... rose somewhat from 2007 to 2009, as sharp declines in capital gains income caused a larger portion of the income of that group to be subject to the ordinary income tax rates. The decline in after-tax income between 2007 and 2009 was much larger at the top of the income distribution than further down the distribution. 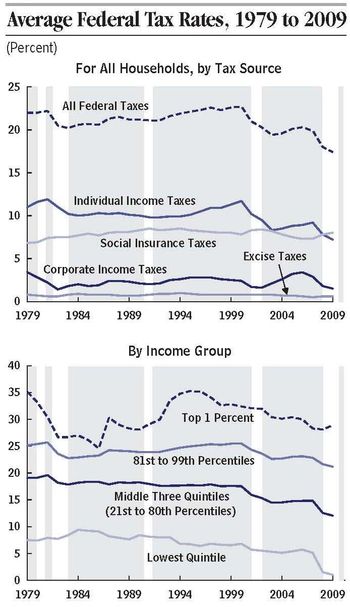 Wealthy Americans earn about 50% of all income but pay nearly 70% of the federal tax burden, according to the latest analysis Tuesday by the Congressional Budget Office — though the agency said the very richest have seen their share of taxes fall the past few years.

CBO looked at 2007 through 2009 — the latest years data are available, but enough to include the early effects of the last recession — and found the bottom 20% of American earners paid just three-tenths of a percent of the total federal tax burden, while the richest 20% paid 67.9% of taxes.

But the richest 1% share of the total tax burden did drop 4.4 percentage points from 2007 to 2009 — a figure likely to bolster Mr. Obama’s calls for them to pay more by letting the Bush-era tax cuts expire.

The big losers over the past few years were the rest of the well-off — those in the 60th percent to 99th percent of earnings — who saw their tax burdens go up.

Listed below are links to weblogs that reference CBO: The Distribution of Household Income and Federal Taxes, 2008 and 2009:

The measurement of tax impact, whether a tax is progressive or not is the change in the effective tax rate as income increases. This is not subject to dispute, it has been a basic tenet of tax analysis since . . . The idea that tax burden should be measured as a percent of total taxes paid is a new concept, designed by those who try to defend the lower effective tax rates by the extremely wealthy.

But this item from the WT article

"In terms of actual earnings, the top 1% suffered the most in the recession, with their average earnings dropping from $1.9 million to $1.2 million."

has left me laughing so much I really cannot add anything else. Really they need to tone this stuff down, uncontrollable laughing this hard can be dangerous.