Argentine President: Criticize Me, the Taxman Will Punish You 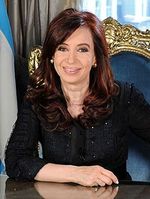 If you want to publicly criticize Argentina’s government, make sure all your tax filings are in order.

That was the thinly veiled message President Cristina Fernández de Kirchner sent Wednesday near the end of a speech broadcast on all national television and radio stations. Reiterating her standard criticism that media “operations” are depressing Argentinians with gloom-and-doom stories, she derided an article published last Sunday. ... In the story, the owner of a real-estate agency, one of its directors and an employee were quoted complaining that recent government measures essentially blocking the sale of foreign currency to citizens had paralyzed their business.

Kirchner then dropped this bit of information: the firm in question hasn’t filed taxes since 2007 and neither has the director quoted in the story, whom she named.

How did she know? She had called up the head of the tax agency to ask, and this, too, she openly revealed on Wednesday’s broadcast. ... [B]y saying that she had called the taxman out of supposed concern for the real-estate agency, she unabashedly established cause and effect: you criticize me; I punish you.

Listed below are links to weblogs that reference Argentine President: Criticize Me, the Taxman Will Punish You:

Argentina is an interesting case with a bizarro (recent) history.

To start, you had to know something was up macro-economically more than a year back when the G essentially nationalized all private retirement funds by forcing them all into government bonds.

So, you could have the Argentine equivalent of a 401k but all the fund choices were "Fund G" - whatever the hell the Gov wanted it to be.

Unsurprisingly the G chose its Treasury.

This isn't "crowding out" - this is "confiscation".

There had to be a sub rosa motivation for that (incipient capital flight - okay, but driven by what exactly? Unclear then and still somewhat unclear now.)

Not something you do as a G unless you have a really good reason/no other choice.

Next, the population distracting drumbeat of war (again) over the Falklands. As though the Falklands magically started mattering again after 30 years.

Last, the G has been threatening to jail people who independently compile and publish inflation data.

But the paradox is - it is hard to tell (from *publicly published* figures at least) what is macro-economically wrong with Argentina.

Generically, it should be doing well - buoyed, like most of the rest of South America, by a China driven commodities boom (apparently it is only neo-colonialism when Americans mine and buy your commodities...).

And the rest of Latin America didn't look like it was going off the rails (at least going back over 18 months ago) but Argentina - with its jack-booted macro moves - gave every clue that something serious was up behind the scenes.

Quite a while ago.

But specifics are hard to come by - *how* is Argentina becoming economically unhinged and why did it start so much sooner than the rest of South America (which is still doing pretty well, actually).

Did Cristina blow the National Treasury on a Paris shopping spree?

Get *really* inspired by a staging of Evita?

Or has the G been lying about the trade balance for *years* and hiding a run on internal capital?

Looks like she took a page out of the Obama playbook. See http://taxprof.typepad.com/taxprof_blog/2009/05/is-obama-.html

Well, she, at least is easier on the eyes than Dick Nixon.