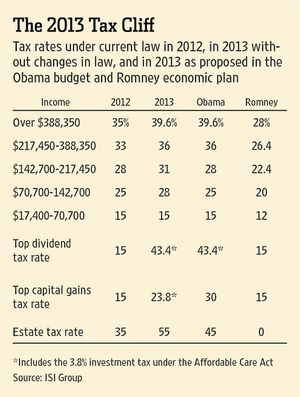 Everyone is suddenly waking up to the horrors of the "fiscal cliff" that arrives on January 1, 2013, but the real clear and present danger keeps getting misdiagnosed. It's the taxes, not the spending.

On Capitol Hill Thursday, Federal Reserve Chairman Ben Bernanke didn't endorse one more round of monetary easing. But he did join the Keynesian chorus decrying "a severe tightening of fiscal policy at the beginning of next year that is built into current law—the so-called fiscal cliff [which] would, if allowed to occur, pose a significant threat to the recovery."

His recommendation to Congress: "I am telling you, try to avoid a situation where you have a massive cut in spending and an increase in taxes hitting all at the same time, as opposed to spreading them out over time." Just what Congress needed: a lecture not to cut spending.

At least Mr. Bernanke got it half right. There are two distinct fiscal cliffs ahead:

first, the rise in tax rates because the Bush reductions are set to expire under current law. This is dangerous and should be postponed pending a reform of the tax code.

The second cliff is the $1.2 trillion in automatic cuts in military and domestic discretionary spending over the next decade as agreed to in last year's debt-ceiling deal. In 2013 these cuts come to roughly $126 billion. The depth of the defense cuts would damage national security, but the economic impact of all of those spending cuts would be benign, even beneficial. ...

[T]he cliff that could break the economy's neck is the scheduled tax hikes. These include a tripling of the tax on dividends, a near 60% increase in the capital gains rate, a 20% increase in personal income-tax rates that will hit small businesses, and the repeal of tax breaks allowing businesses to write-off capital purchases. (See the nearby table for the comparisons.) ...

After a five-year spending binge and $5 trillion in new debt, markets want to know if Washington can control its tax and spending appetites. Any such signal would be bullish for growth. In the faux debate between growth and austerity, the Keynesians have deliberately confused the terms. They want to impose austerity on the private economy with tax increases. But for the private economy to grow faster, we need austerity for the government.

Listed below are links to weblogs that reference WSJ: The Tax Cliff:

Stupidity is still not illegal.

Instead of cutting defense spending, cuts should be made to "entitlements."

Congress won't do anything this year. The increases will occur on January 1st and the new congress will rollback the increases later in that month and make them retroactive. The cuts on the other hand will probably stay if for no other reason than to give republican's room to make cuts to entitlements.

Ugh. I don't want the people in government who put this vicious brainlessness in place merely defeated at the polls and sent back to private life. I want them stripped of their citizenship and deported. Surely there's some young Mexican who works very hard and is eager for citizenship we can take in exchange.

I propose replacing the current levels of government with artificial intelligence.
It couldn't be any less competent in managing the budget that are the myriad overpaid human, and even if it were wildly incorrect, the money saved from pensions, salaries, etc., would more than compensate for the AI's inaccuracies.