"This is not a career-enhancing book, and people early on told me not to write it for that reason," Tamanaha said before the book's June 15 release. The blunt title, Failing Law Schools, tells why. Its central argument is that going to law school is a raw deal for most students. Tamanaha and other law professors and administrators who have watched graduates struggle with debt, declining career prospects and stagnant salaries hope the book's dissection of the problem will jolt colleagues out of complacency. ...

Failing Law Schools essentially flips the standard script on the rising cost of legal education. Bloated faculties of overpaid professors, the gaming of the U.S. News & World Report rankings and reams of academic scholarship pumped out each year actually are the effects of increased tuition revenue, not its root cause, Tamanaha argues.

The real culprits (the average public school tuition is now $22,116 per year, with private schools costing an average $39,184, according to the ABA) are high demand and the fact that for years law schools have been able to raise tuition beyond the rate of inflation and still turn away potential students, he writes. 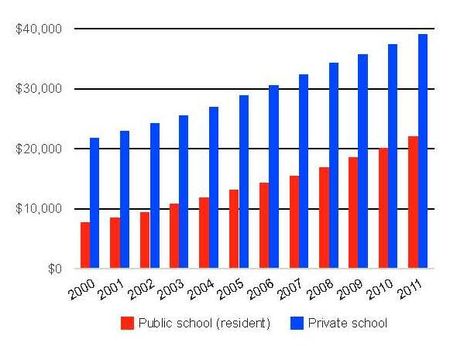 But others view the book as just the latest overly dire prediction about the fate of law graduates and misplaced finger-pointing over tuition costs. "Most people in the profession were already concerned about what it costs to get a law degree," said John O'Brien, dean of the New England School of Law and chairman of the ABA's Council of the Section of Legal Education and Admissions to the Bar. "Nobody feels good that tuitions have gone up. But the claim that a law degree is a bad investment doesn't hold water."

Perhaps the freshest information in Failing Law Schools comes from Tamanaha's attempts to use recent job data, salary figures and debt estimates to calculate whether a law degree is worth the cost of attendance for most students. These are chapters the author hopes will find their way to would-be law students via pre-law counselors.

That equation will work out well for certain students — namely, graduates of elite law schools who land high-paying corporate law jobs, or those able to keep their debt loads below $50,000. Flagship state schools with tuition below $20,000 are a fairly good bet, he writes, recommending against any debt load above $150,000 for anyone not attending a school ranked within the top five. ...

Failing Law Schools faults the federal loan system for making it far too easy for law students to borrow tuition money, even if going to law school makes no sense for them. Tightening the availability of such loans, or at least enacting accountability standards for schools whose recent graduates are struggling to pay back their loans, would force law schools to get serious about cost containment, Tamanaha argues. Specifically, the government could cap the amount of federal loans any individual law student or law school could take out, or it could stop lending to any law school where a third or more of graduates can't pay back the loans they took out. 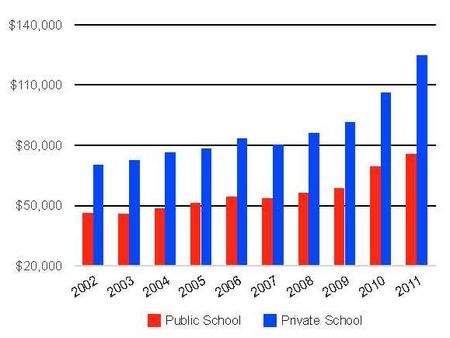 In Failing Law Schools, Brian Tamanaha argues that law school is no longer a realistic option for most students, who emerge deeply in debt and with slim prospects for well-paying legal jobs. Here are his arguments in summary:

To see what I mean we need look no further than Dean O'Brien's own institution, New England School of Law. Nine months after graduation, only 34.4% of the 2011 class had obtained full time, permanent lawyer jobs (see ABA data broken down here). The average debt for 2011 NE law grads was $120,480 (90% of the class had debt). NE claims that the median salary in the private sector for the class of 2010 was $67,500, but only 15% of the grads in private employment reported their salaries so the actual median salary for the class is undoubtedly much lower. People who earn that much will struggle to make the monthly payments ($1,400) due on the average debt. (Meanwhile, Dean O'Brien received $781,710 in total compensation in 2009.)

O'Brien currently heads the ABA's Council of the Section of Legal Education, whose regulatory mission is to decide whether it's a good idea for John O'Brien to get paid ... $867,000 per year to run a law school with these outcomes for its graduates.

Anon - You seem to be willfully ignoring the travails of the newly and recently graduated lawyers. The employment rates of the classes of 2009, 2010, and 2011 are abysmal. There are probably 60,000 lawyers from those classes who are not working in jobs for which a JD is required, if they are working at all. The prospects for the class of 2012 are about the same. The unfortunate truth is that the legal profession is undergoing a sea change, and in response, applications to law schools are down 25% in the past year. Tell me why anyone would rack up over $100,000 in debt to go to a third or fourth tier law school to have at best a 50/50 chance of landing a legal job paying $35-50,000/yr. The value proposition is just not there and sticking your fingers in your ears and going "I can't hear you" won't make things any better.

The problem is that those numbers A. refer only to lawyers and not law school graduates, many of whom never become lawyers and B. refer in large part to an older generation of lawyers, who have had a very different experience than more recent generations.

The claims are simply not supported by the data.
Lawyers actually do quite well, even in a down economy.
You can see the data from the Department of Labor here:
http://www.askapeer.com/pages/labor-market-data
The median lawyer makes $115,000 per year. The average (mean) is over $130,000. By contrast the typical college graduate makes around $55,000 per year.
90 percent of lawyers make over $55,000. 75 percent of lawyers make more than $75,000. The top 25 percent make more than $170,000 per year.
Granted, these are averages, not just starting salaries, but by mid-career, most lawyers are comfortably upper middle class.
And what’s the unemployment rate for lawyers? Between 1 and 3 percent, much lower than the overall unemployment rate.
The number of lawyers continues to grow, and as a percent of the labor force, lawyers have increased over the last 12 years.
So what’s the problem with law schools?