Mulligan: The EITC Discourages Work for Most Taxpayers

The earned-income tax credit is often said to encourage work, but it may do just the opposite. ... The chart below shows the credit’s schedules for the 2011 tax year as a function of annual earned income for a given family situation (other family situations have the same basic shape). The schedule shown illustrates the mountain-plateau pattern described above: an increasing portion for the lowest incomes, a flat portion, a decreasing portion and then finally a flat portion of zero. 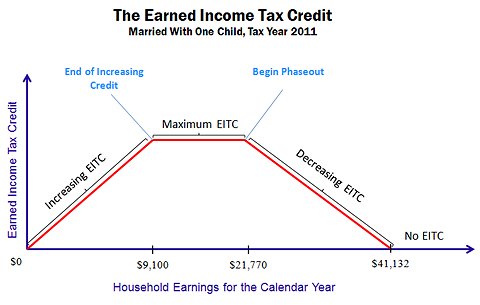 ... For the same reasons that the credit encourages more work among people who might otherwise earn close to zero during a year, it can also influence some people to work less — those with earnings at or slightly above the downward-sloping or “phase-out” portion of the schedule, where people lose about 20 cents of their credit for every additional dollar earned during a year. In other words, for households on the downward-sloping portion of the earned-income tax credit schedule, the credit acts as an extra 20% tax on the income they earn in that range. The work-encouraging potential of the credit occurs only on the upward-sloping portion. ... [I]t is more common for families to be on the part of the earned-income tax credit where it acts as a tax, rather than a reward to additional work.

Listed below are links to weblogs that reference Mulligan: The EITC Discourages Work for Most Taxpayers:

How can the NBER keep Krugman as an associate and not admit that it damages its credibility, unless it doesn't care?

Last year New York Times columnist and Nobel laureate Paul Krugman called for space aliens to invade earth so that the government would spend money to mount a defense thereby stimulating the economy. As aliens have yet to comply with Krugman's wishes, he advocated on HBO's Real Time Friday that scientists should get together and lie about an imminent attack to boost federal spending....

I asked a fairly well-known economics professor if the data and analysis of the NBER could be trusted, without mentioning any particular study. His reply was, "NBER generally is reliable but stats are not a substitute for good theory."

As far as both studies in this topic are concerned, I see flaws in both of them.

NBER includes many right wing economists such as Mankiw, Barro, and others, as well as liberals.

Chicago, however, is a very ideologically charged place, and those who disagree with the prevailing ideology are not welcome.

Gee, no implied bias there, huh?

Perhaps, the description could be expanded to say that Seto referenced the NBER, which boasts of left-wing Noble Prize (anti-American) Keynesian associates, including Paul Krugman, who doesn't have an honest bone in his body.

This would be the same Mulligan who thinks people crave unemployment(?).

May cat knows more about labor markets than Mulligan.

This is, of course, an empirical question, not a theoretical one. For a useful summary of recent empirical work, see Nada Eissa & Hilary W. Hoynes, Behavioral Responses to Taxes: Lessons from the EITC and Labor Supply, published in 2006 by NBER and available online at http://www.nber.org/chapters/c0063.pdf.

Here is a summary of their conclusions: "The overwhelming finding of the empirical literature is that EITC has been especially successful at encouraging the employment of single parents, especially mothers. There is little evidence, however, that the EITC has reduced the hours worked by those already in the labor force. The empirical literature on married women is somewhat smaller but again consistent in its findings. The studies show that the EITC leads to modest reductions in the employment and hours worked of married women."

The latter problem -- the one area identified in which the EITC does seem to have a negative effect on paid work -- is not an EITC problem at all. It's the same secondary worker problem Ed McCaffery has written about, (Taxation and the Family: A Fresh Look at Behavioral Gender Bias in the Code, 41 UCLA LAW REVIEW 983 (1993)), and it affects secondary workers up and down the income range.

If there is more recent empirical work of which I am not aware, I'd be grateful for the references. Thanks.