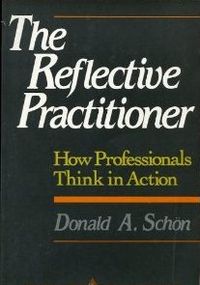 I've started working on an essay for a symposium on the future of legal education ... I decided to re-read a work I have cited in the past, Donald A. Schön's The Reflective Practitioner: How Professionals Think in Action.

All professions, in Schön's view, demonstrate this tension between rigor (of research in technical disciplines) and relevance (of the application of knowledge to practice). ... The role of legal academy scholarship in practice falls somewhere in between the role of research in laporscopic surgical practice and the role of research in barbering practice. I will leave others to speculate on precisely where it falls. But in terms of how much pure or applied university-based research we actually need, I have a feeling our profession is closer to barbers than surgeons. ...

Nevertheless, demonizing law professors in modal schools (the vast majority of which take seriously their obligation to train lawyers for non-academic careers) is like demonizing bankers or CEOs. It scratches an atavistic urge to attribute misfortunate to the gods. ... I don't particularly care for the U.S. tort system and its effect on product and medical costs, but attributing the crisis of legal education to current law professors because they get paid well or write theoretical "law and ..." articles is like attributing defensive medicine to the plaintiffs' medical malpractice bar because of the standard one-third contingent fee. People naturally do what they get measured on and paid well for.  And it's perfectly legal to boot.

In short, blaming law faculty for responding precisely to the incentives the system creates is understandable but unreflective in its own way. Rather, the current problem is institutional and structural, as Brian Tamanaha, the late Larry Ribstein, Bill Henderson, and others have observed. Because of regulatory and accreditation restraints, almost all schools are similarly modal, so almost every law school, even well down in the lower rankings, consists of faculty with the same career drivers and motivations.

If one's school can't support and doesn't need a Department of Jurisprudence alongside the history, sociology, economics, and philosophy departments, maybe it shouldn't have one. Going that route would take some real cojones, and no doubt create more human candidates for status as gods or demons.

Listed below are links to weblogs that reference Lipshaw: Don't Blame Faculty for Legal Education's Problems:

I won't blame the faculty, they didn't impose Supreme Court Rules requiring 4+3 education, nor do they run the law schools as cash cows for the Central Administration.

But, they are getting paid a lot of money for being pretty faces, ones that could be replaced by a DVD and an adjunct. And, since they have no responsibility, nor much productivity, I will shed no tears, nor will I be surprised, when half the law schools close and the other half whack their faculties in half.

When I went to law school, my 1st year classes were 90 -- 100 students, and my 2nd and 3rd year classes were 30 -- 50. Use those guidelines, and get rid of the really ridiculous electives (anything with gender or sex in the title e.g.) and you can cut the faculty in half. I would guess that 3/4ths of all law professors today will be para-legals or baristas in 10 years time.

The law and, by extension, lawyers are necessary evils. What we actually need is a lot less of both laws and lawyers.

but attributing the crisis of legal education to current law professors because they get paid well or write theoretical "law and ..." articles is like attributing defensive medicine to the plaintiffs' medical malpractice bar because of the standard one-third contingent fee.

What a surprise! A lawyer denying that the plaintiff's medical malpractice bar has anything to do with the cost of medicine.

In the tobacco litigation, the plaintiff's bar established the legal precedent that a legal industry whose products bear a cost to society, must compensate society for those costs. Since everyone but lawyers knows that litigation is a cost driver in medicine, let's apply that precedent to the plaintiff's bar and establish a 50% surtax on personal injury attorneys fees.