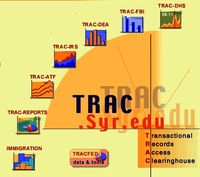 The latest available data from the federal courts show that during March 2012 the government sued 279 individuals seeking recovery of defaulted student loans. According to the case-by-case information analyzed by the Transactional Records Access Clearinghouse (TRAC), this number is up 25.7% over the previous month when the number of civil filings of this type totaled 222. ...

As shown below in Figure 1, prosecutions rose fairly steadily from 169 students being sued for defaulting on their loans in December 2009 to 598 students — or three and a half times — in April 2011, but then began falling. Even at their peak, relative to the hundreds of thousands of defaulters, prosecutions remain fairly rare according to the government.

Compared with the same period five years ago, suits for recovery of defaulted student loans for March 2012 remain higher. Overall, the data show that civil filings of this type are up 22.9% from levels reported in March 2007. Figure 1: Suits for Recovery of Defaulted Student Loans over the last 5 years

The month-by-month suits are shown by the vertical bars in Figure 1. The superimposed line on the bars plots the six-month moving average so that natural fluctuations are smoothed out. Reported one-year and five-year change comparisons are based upon the moving averages.

They can sue all the kids they want to sue, and quite a lot more besides, but they don't have jobs, and they don't have money. The Feds just might as well bang on a teapot.