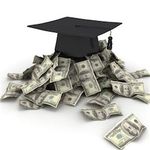 Approximately half of the 45,000 people who will graduate this year from ABA-accredited law schools will never find jobs as lawyers. (The Bureau of Labor Statistics estimates that over the next decade 21,000 new jobs for lawyers will become available each year, via growth and outflow from the profession.)

People currently in law school are going to graduate with an average of $150,000 of educational debt. This debt will have an average interest rate of 7.5%, meaning the typical graduate will be accruing nearly $1,000 per month in interest upon graduation. Unlike almost every other form of debt, these loans cannot be discharged in bankruptcy.

In short, one out of every two law graduates will not have a legal career, and most of the rest will never make enough money to pay back their educational loans. This means they will either have to rely on other sources of income (spouses, extended family) to service their debts, or they will have to go into the federal government’s new Income-Based Repayment program. This program will keep people in debt servitude for 25 (soon to be reduced to 20) years, during which time the balance on their loans will grow, making it almost impossible for them to qualify for mortgages and many other forms of consumer debt. Finally, the debt – which for many law graduates will have grown to more than $1 million – will be discharged, meaning, of course, that taxpayers will be left to pick up the tab.

All this adds up to a completely unsustainable system – one in which the cost of acquiring a law degree no longer bears any rational relationship to the benefits the typical graduate can expect to receive from it. In this regard, the economic disaster that legal education has become is merely a particularly stark example of the increasingly absurd financial structure of higher education in America.

How did we get into this mess? The basic problem – one that goes far beyond the growing crisis inside America’s law schools – is a product of two related myths. The first is that educational debt is almost axiomatically “good debt” – that is, the sort of debt that will generate a positive return on investment. The second is that the market for higher education is rational and efficient. ... Most law students now pay far more for their degrees than those degrees are worth.

The result has been several consecutive decades of rising costs in real dollar terms. Law schools provide a particularly stark example of these trends:  A generation ago, as measured in 2012 dollars, annual tuition at Harvard Law School was $12,500 per year. Resident tuition at my alma mater, Michigan Law School, was $4,400 per year, again in current 2012 dollars. Today the respective figures are $51,000 and $48,000.

Despite the rhetoric of self-interested and/or clueless academics, higher education is not “priceless.” At some point, the cost will come to outweigh the benefit.  That point has already been reached for countless university graduates in general, and law school graduates in particular. As prospective students and their families become aware of this fact, our debt-fueled higher education bubble, like so many other financial bubbles before it, will pop.

Listed below are links to weblogs that reference Campos: The Law Student Debt Crisis: