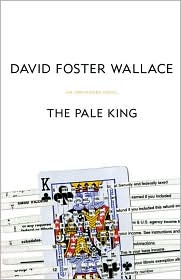 David Foster Wallace — author of the celebrated novel Infinite Jest and among the most acclaimed American fiction writers of his generation — killed himself in 2008 at the age of forty-six. He left in his office hundreds of pages of The Pale King, an unfinished novel set in the fictional Peoria, Illinois, regional examination center ("REC") of the Internal Revenue Service ("IRS" or "the Service") in 1985. Although many chapters of the novel were seemingly complete, Wallace left no indication (other than what could be gleaned from the chapters themselves) of the order of the chapters (pp. vi-vii). Michael Pietsch, who had served as the editor of Infinite Jest, assembled the chapters into a surprisingly coherent — although more or less plotless — novel, and the book was published to considerable critical acclaim in early 2011.

As assembled by Pietsch, The Pale King focuses on a dozen or so income tax examiners — including a fictional David Foster Wallace — working at the Peoria REC. The examiner's job is to decide whether income tax returns (selected for the examiner's consideration by computers) should be referred for audit (Chapter Twenty-Seven). The novel describes how the featured employees came to work for "the Service," as it is generally referred to by its employees (p. 244), and how they deal with the boredom of their jobs, as well as their attitudes toward the Service and toward the tax system itself. Although some of the chapters can stand on their own as self-contained stories, the book as a whole has no real plot. Some of Wallace's notes, included by Pietsch as "Notes and Asides" at the end of the book, suggest Wallace had plans for an overarching plot, based on a power struggle between IRS traditionalists favoring the continued use of human examiners and reformers wanting to replace human examiners with computers, but only a few hints of this conflict appear in the published novel. It is possible that even a completed version of The Pale King would have been essentially plotless. As Pietsch points out in his "Editor's Note," one of Wallace's notes describes the book as "a series of setups for things to happen but nothing ever happens."

I am not a literary scholar or critic, nor am I pretending to be one in this Review. Rather, I am an academic tax lawyer (and a former temporary employee of the Internal Revenue Service), and the Review is written from that perspective. For many creative works, a review of this sort would be inappropriate. It does not much matter, for example, whether the film version of The Wizard of Oz accurately depicts life on a Kansas farm in the 1930s. But The Pale King is different. The book devotes a significant percentage of its pages to detailed explanations and discussions of tax civics, tax policy, and tax administration, and it is every bit as serious about those topics as Moby-Dick is about whaling. The Pale King is not merely set in a tax administration facility; it is also, in very significant part, about taxes and tax administration. It is a Moby-Dick of taxes, aiming to educate its readers about a highly specialized field of endeavor, and using that field of endeavor to explore some of the profoundest themes. On the assumption that a whaler’s review of Moby-Dick would have served a useful purpose, I offer this tax lawyer’s review of The Pale King.

Listed below are links to weblogs that reference Zelenak: The Great American Tax Novel: