CTJ: Who Pays Taxes in America?

Citizens for Tax Justice, Who Pays Taxes in America?:

It’s often claimed that the richest Americans pay a disproportionate share of taxes while those in the bottom half pay nothing. These claims ignore the many taxes that most Americans are subject to — federal payroll taxes, federal excise taxes, state and local taxes — and focus instead on just one tax, the federal personal income tax. The other taxes are mostly regressive, meaning they take a larger share of income from a poor or middle-income family than they take from a rich family.

Many Americans do not have enough income to owe federal personal income taxes, but do pay these other taxes. The federal personal income tax is a progressive tax, and the combination of this tax with the other (mostly regressive) taxes results in a tax system that is, overall, just barely progressive. Total tax obligations are, on average, fairly proportional to income.

This table illustrates the share of total taxes (all federal, state and local taxes) paid by Americans in different income groups in 2011. 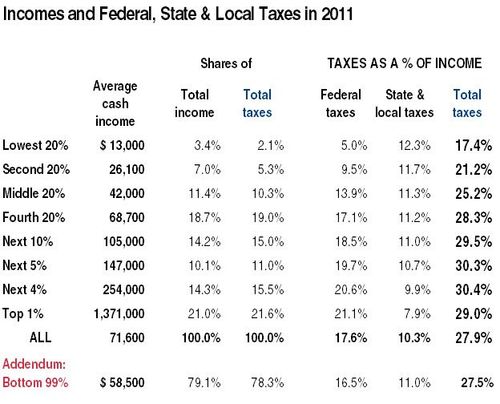 Listed below are links to weblogs that reference CTJ: Who Pays Taxes in America?:

This chart proves that professors aren't good at math. The Federal government is approaching 16 trillion in debt and if you look at the chart above you will understand why.
At the federal level the top 10% of earners pay 48% of all federal income taxes.It is at the state level where the playing field is much more level when it comes to paying taxes.
This fact is relevant because the federal government collects over 1 trillion in taxes per year while the states collect a much lower amount.
You also forgot to mention that the 2.9% medicare tax has no income cap and is levied on your entire amount of income.
Next time use a calculator.

So if this data is correct, the wealthy do not, contrary to the claims of Conservatives pay a hugely disproportionate share of total taxes, as Gramm and McMillin argue in the WSJ.

I should add, factoring in *deferred taxes*, as ER suggested, is also valid.

One does NOT have to consider ALL taxes. All the debate is about federal income taxes -- the taxes which fund the operations of this nation. That's the issue, and that's where the major deficits and $15 trillion debt lies (not counting unfunded liabilities like social security and medicare.)

Other major taxes benefit the contributors, like social security, or go for local projects and are voted upon by the citizens, like sales taxes, and which often have expiration dates.

And, I can't figure out why people don't think that wealthy people don't pay sales taxes, unless that person happens to be Sen. Kerry, who moves his yacht around to avoid paying his state's sales and use tax.

But, should we also factor in a look-back on income taxes and gift & estate taxes that were paid earlier to accumulate and transfer wealth to people who have earnings on that? Fair is fair.

It sounds like they feel they are losing the argument. This sounds like an argument that the complete tax burden is too high. Average Cash Income, how interesting. When they actually start factoring in bennies, then maybe I will listen. It doesn't help that the US really does have the most progressive system in the world.

One does have to consider all taxes, not just federal income taxes. The table is probably misleading, though, because it only includes current-year taxes. That means somebody who save 50% of their income or has unrealized capital gains pays low taxes, because they don't pay any sales tax and has lots of deferred taxes. I'd like someone to write a paper working out what the shares are over the long term. (And if you say the rich person never spends his savings, then do remember that means he never gets to consume them either, and it's consumption that ultimately we care about.)