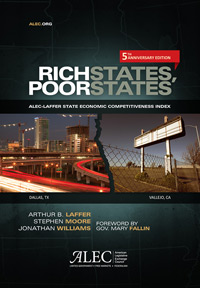 Barack Obama is asking Americans to gamble that the U.S. economy can be taxed into prosperity. That's the message of his campaign for the Buffett Rule, which raises income-tax rates on millionaires to a minimum of 30%, and for the expiration of the Bush tax cuts. He wants to raise the highest income tax rate by 20%, double the rate on capital gains, add a new 3.8% tax on all capital earnings, and nearly triple the dividend tax rate.

All this will enhance "economic efficiency," insists a White House economic report. As for those who disagree, says President Obama, they're just pushing "the same version of trickle-down economics tried for much of the last century. . . . But prosperity sure didn't trickle down."

Mr. Obama needs a refresher course on the 1920s, 1960s, 1980s and even the 1990s, when government spending and taxes fell and employment and incomes grew rapidly.

But if the president wants to see fresher evidence of how taxes matter, he can look to what's happening in the 50 states. In our new report Rich States, Poor States, prepared for the American Legislative Exchange Council, we compare the economic performance of states with no income tax to that of states with high rates. It's like comparing Hong Kong with Greece or King Kong with fleas.

Every year for the past 40, the states without income taxes had faster output growth (measured on a decadal basis) than the states with the highest income taxes. ... Over the past decade, states without an income tax have seen 58% higher population growth than the national average, and more than double the growth of states with the highest income tax rates. ... The transfer of economic power and political influence from high-tax states toward low-tax, right-to-work ones is one of America's most momentous demographic changes in decades. Liberal utopias are losing the race for capital. The rich, the middle-class, the ambitious and others are leaving workers' paradises such as Hartford, Buffalo and Providence for Jacksonville, San Antonio and Knoxville.

Illinois, Oregon and California are state practitioners of Obamanomics. All have passed soak-the-rich laws like the Buffett Rule (plus economically harmful regulations, like California's cap-and-trade scheme), and all face big deficits because their economies continue to sink. ...

Taxes aren't all that matters, to be sure, and low-tax states don't always outperform high-tax ones. Often people who smoke don't get cancer, and sometimes people who don't smoke do get cancer, but that doesn't mean it's smart to smoke. It's a dangerous gamble to raise taxes on capital and businesses to nearly the highest rates in the world and hope that nothing bad will happen. 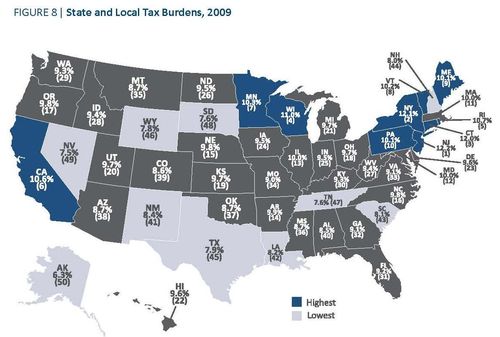 Listed below are links to weblogs that reference A 50-State Tax Lesson for President Obama :

Whenever someone starts off saying, "I am a conservative, but...," you can be sure that he's simply pretending to be a conservative in an attempt to fool people and sway their opinions.

Was this written on a napkin? Does anyone read Laffer this century? BTW, Prof. Laffer, see "There's No There There: Low Tax Rates and Economic Growth" above.

I am a conservative, but I never pay any attention to the work of Laffer and Moore.

To much simple minded cause-and-effect claptrap.