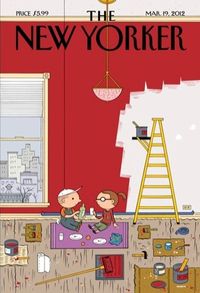 The New Yorker, Tax Me if You Can: The Things Rich People Do to Avoid Paying Up, by James B. Stewart:

Relatively scant media attention has been paid to residency requirements, even though enormous revenue is at stake. Tax audits and hearings are ordinarily confidential, but several published opinions and related appeals reveal how some New Yorkers take advantage of the residency requirement. (New York City tax laws don’t apply to people who are deemed to be nonresidents, even if they own a residence in the city and work there. Nonresidents are allowed to spend no more than half a year—a hundred and eighty-three days—in New York City.) Many states have such requirements. Relatively few cities levy personal income taxes, but the largest ones that do, besides New York City, are Baltimore, Cleveland, Denver, Detroit, Philadelphia, Pittsburgh, Portland, San Francisco, and St. Louis. The problem is especially acute for cities like New York, which are geographically close to nearby lower-tax jurisdictions. People who want to avoid both New York State and New York City income taxes are permitted to own a residence and work in the city and the state but must maintain a primary residence outside the state. The residency loophole provides an obvious financial motive to lie. One prominent tax lawyer said that “cheating is rampant.” Discusses the residency-requirement cases of hedge-fund manager Julian Robertson, criminal-defense attorney Thomas Perry, and Martha Stewart.

Listed below are links to weblogs that reference New Yorker: The Things Rich People Do to Avoid Paying Taxes:

Here's what "the poor" do to avoid paying taxes: Have kids that they cannot afford but which give them refundable tax credits, accept cash only using the underground economy, sign up for every government handout, steal from other people, sell drugs, hustle tax-free money as street beggars for more than jobs pay, resist taking gainful, lawful employment, and never file tax returns. Hey, all of sudden the rich don't look so greedy, anymore. Let's see some academic study on this.

There are some statements in this article that are flat-out wrong.

"People who want to avoid both New York State and New York City income taxes are permitted to own a residence and work in the city and the state but must maintain a primary residence outside the state."

Perhaps the New Yorker author does not know anyone who lives in CT or NJ that works in the City. (There is, after all, only one City.) Everyone who works in NY is subject to NY state tax regardless of where their primary residence is. So the author is a) ignorant or b) feeding a bias.

In fact, last year a CT resident was subject to NY tax because he owned a NY summer home that he spent 2 weeks in. I cannot be bothered looking up the cite to refute such an - oh, those horrible 1% -article.

You do need a NYC residence (or pied-a-tierre) to pay NYC taxes, but that seems beside the point when the article is so sweepingly incorrect.

The Denver "income tax" is actually a head tax on employment. It's really tough to put it in the same listing with the taxes levied by the other cities.