CRS: An Economic Analysis of Tax Base Broadening

When evaluating tax expenditures as potential base broadening provisions, it is useful to consider the general kinds of behaviors they affect or the general objectives in determining the feasibility of eliminating or modifying specific tax expenditures. Consequently, tax expenditures are divided into seven major categories: saving, business investment, consumption, owner-occupied housing (which is a combination of an investment choice and a consumption choice), labor supply, government programs (which in many cases would have no behavioral effects but are simply income transfers), and a category termed structural (which provides benefits based on family circumstances rather than affecting behavior).

The analysis in this report suggests there are impediments to base broadening by eliminating or reducing tax expenditures, because they are viewed as serving an important purpose, are important for distributional reasons, are technically difficult to change, or are broadly used by the public and quite popular. Given the barriers to eliminating or reducing most tax expenditures, it may prove difficult to gain more than $100 billion to $150 billion in additional tax revenues through base broadening. This amount could have a significant effect on reducing the FY2014 budget deficit—reducing the projected $345 billion deficit by 30% to 43%. This additional tax revenue, however, is equivalent to about 6% to 9% of projected FY2014 individual income tax revenue, and, consequently, would not allow for significant reductions in tax rates (about a one or two percentage point reduction for each bracket).

A congressional report detailing the value of major tax breaks shows they amount to more than $1 trillion a year—roughly the size of the annual federal budget deficit—and benefit wide swaths of the population.

The figures could be useful to lawmakers of both parties and President Barack Obama, who are looking for ways to shrink future deficits and offset the anticipated cost of overhauling the much-criticized U.S. tax code, an effort likely to include tax-rate cuts. Both parties are looking to trim or eliminate tax breaks to achieve those goals. ...

The new report, by the nonpartisan Congressional Research Service, underscores how far-reaching many of the tax breaks are, which makes changing them a politically daunting task. ... The report, citing political opposition, technical challenges and other reasons, said that "it may prove difficult to gain more than $100 billion to $150 billion in additional tax revenues" by eliminating tax breaks. That likely would leave little for reducing tax rates, perhaps only enough for one or two percentage points in the top individual rate, while maintaining the same level of revenue, the report said. 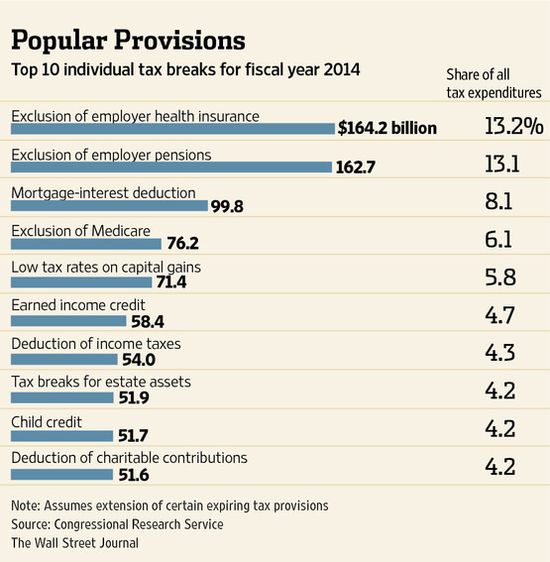 Listed below are links to weblogs that reference CRS: An Economic Analysis of Tax Base Broadening:

From the report: “30% of the revenue loss of tax expenditures is from provisions directed at encouraging savings”

That’s because the methodology is faulty, looking only at fiscal year 2014. If you tax 401k’s and such today, you can’t collect tax on the same income when it’s withdrawn. That foregone revenue is beyond 2014, so it vanishes from this accounting. How clever.

This same trick has been used for other items in the “Saving” category. The report appears to endorse a “spend as you go” approach to this one-time accounting change windfall. In other words, spend as if this revenue will continue even though as a matter of mathematics it cannot. I can’t argue the fact that Congress has been doing this for decades, but the CRS should not pander to this irresponsibility.

I wonder if the pension exclusion is calculated correctly. It should not be the amount of pension benefits to current workers, since pension benefits to retired workers ARE taxed. Rather, it should be the tax loss from not double-taxing the capital income on pension funds.