WaPo: Which of the Presidential Candidates Is Most Charitable?

Washington Post, Romney and Obama Vie for Title of Most Charitable; Santorum Gave Least to Charity:

President Obama and his wife, Michelle, despite having the second-lowest income of the four candidate/spouse combos, gave the highest percentage of their $1.8 million income to charity in 2010. ... He and Michelle gave 14.2% of their AGI, while the Romneys gave 13.8%. ... Santorum and Newt Gingrich, by comparison, gave very little of their income to charity. Gingrich and his wife, Callista, gave 2.6% of their $3.2 million income in 2010. Santorum and wife Karen, who made the least in 2010 (less than $1 million), also gave the lowest percentage of their income to charity, at 1.8%.

Here is a fuller picture of the charitable contributions of the four candidates: 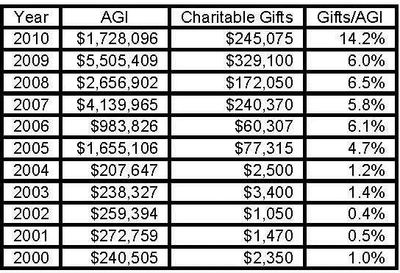 Listed below are links to weblogs that reference WaPo: Which of the Presidential Candidates Is Most Charitable?:

Here is some info on Romney. Most of what he gives is to the Mormon Church.

Here is how the Mormon Church uses the money.

I wonder if most of Romney's contributions went to the Mormon church...

Mike, I don't disagree but it would be quite difficult for us to trust a politician on how they were charitable. I find it odd that none of the candidates tithe.

I'd like to know what charities are receiving their donations. I'd especially like to know if Romney's gifts are to special trusts that he and his wife have set up. Such trusts aren't the same (IMO) as giving to (say) the American Cancer Society, the Red Cross, or their church.

Thanks for a useful comparison. Tax deductions aren't perfect measures of giving, but they're a great first start, and the time series is useful too.

But where's Ron Paul? Is he showing that if we don't make revealing one's tax returns compulsory, we can't trust candidates to do it voluntarily? If so, we should draw the logical deduction that he has something to hide.

If you have huge itemized deductions for investment interest expenses, like I think Romney did, it doesn't seem fair that AGI would be a measure of your charitability. I.e., the interest expense is necessary to generate the interest income, and so only the net should be considered.

I wonder if a tax deduction is much of a measure of a man's charity. After all, if one labors for no compensation for the benefit of others one may "give away" quite a bit with no 1040 fanfare. Also, by limiting ones income, less tax goes to the governments, which are not that great a steward of their "revenues". Furthermore, one might take on the burdens of others or take on the care of others, without those charitable acts being revealed on Schedule A.