NY Times: The Tax Rate of the 400 Richest Americans

New York Times, Working All Day For the IRS, by James B. Stewart: 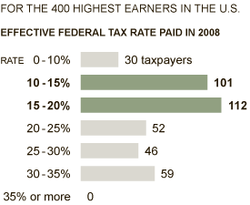 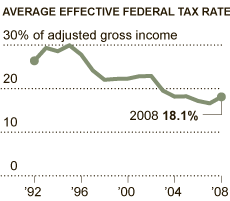 I’ve never minded paying my taxes. I’ve always been proud of it. But when people making hundreds of millions a year are paying a substantially lower rate than I and the many people who wrote to me do, something has gone haywire.

Prior TaxProf Blog coverage of the Top 400 taxpayers:

Listed below are links to weblogs that reference NY Times: The Tax Rate of the 400 Richest Americans:

Mr. Stewart has not covered himself with glory. The articles are diffuse, do not refer to any coherent economic theory, and do not grapple with the methodological shortcomings of the raw IRS data -- the chief one being that it makes no attempt to integrate the income of corporations and their shareholders.

The CBO attempts to do overcome those problems. They use comprehensive income, and they try to put corporations and shareholders together. The comparison is interesting. In the most recent CBO Analysis, they find that the top 1% (a much larger group that the top 400) had an effective income tax rate of 19% in 2007, (compare to the above 18.1% in 2008), but that they a had total effective federal tax rate (including corporate taxes) of 29.5%.

Further, 400 tax payers is not many when we are talking about 120,000,000 households. I doubt that there is any intellectual or statistical validity to studying the system that governs 120 million by selecting one out of 300,000 by a non random method. Further, the way the IRS presents data makes it impossible to know whether these 400 people are consistent group (i.e. The Rich) or whether they are simply people who realize enormous capital gains in the course of liquidating the work of a lifetime, or even of several generations.

Incidentally, the CBO data shows that for both the income tax and total taxes, higher percentiles paid higher rates than lower percentiles. The system is progressive. It just doesn't punish the people Mr. Stewart hates.

Walter is correct. Maybe Republicans should just propose to exclude capital gains and dividends entirely from AGI. Then the average tax rate (as defined by taxes divided by income) would be high for the rich.

The type of analysis that "Walter SobchaK" offered is something completely missing in the political and class-envy debates, mainly that it is good and makes sense. The NYT would never post one of his letters.

Why should taxes be on income at all? Why not consumption?

And why not an alternative MAXIMUM tax?

The wealthy do not use roads, bridges, schools, or defense at 40x the rate of middle class people. Therefore...

It is fair? Sure. As I said, the rich don't use the government 40x more than average people.

Sure, leftists will whine that a $10M earner paid just 2%. But he didn't consume in proportion to his income.

Plus, the US will attract tons of ultrawealthy people from around the world, since they would pay much less than in their own countries. Brazilian soccer players, Bollywood movie stars, Russian petro-billionaires, you name it, they will all want to become US citizens to pay the low $200K amount.