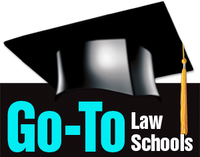 National Law Journal, It's Tough Out There:

We've ranked the top 50 law schools by the percentage of 2011 juris doctor graduates who took jobs at NLJ 250 firms, the nation's largest by headcount as identified by The National Law Journal's annual survey.

Here are the Top 25 (along with each school's U.S. News ranking):

With no end in sight to tuition increases, The National Law Journal looked at which schools offer the biggest bang for their tuition buck when it comes to landing a job at a large law firm. We identified the schools sending the highest percentage of their class of 2011 to associate jobs at NLJ 250 firms for the lowest tuition price.

The best value this year goes to Pennsylvania, which sent a higher percentage of its most recent graduating class to NLJ 250 firms — 57% — than any other school. At $48,362, Pennsylvania's annual tuition is the 10th highest, meaning that nine other schools charged more but had lower placement rates at the country's largest law firms. Stanford, Harvard, and Northwestern also landed near the top of the list in the cost-benefit analysis. ... The most expensive school on the 50 Go-To Law Schools list was the University of California, Berkeley with an annual tuition of $52,245. The school with the lowest tuition was BYU at $20,560. 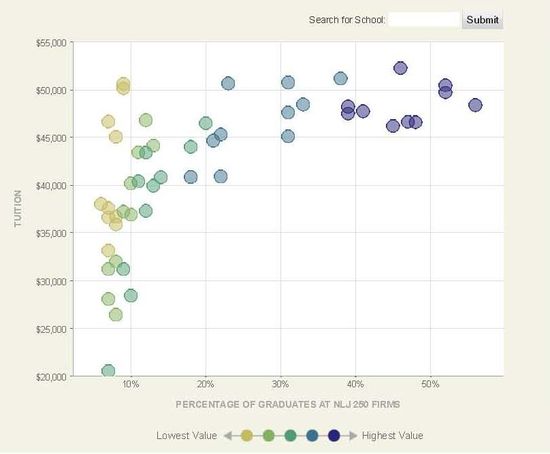 The schools that NLJ Top 250 relied upon the most to supply first-year associates. Here are some highlights:

Four years after the onset of a painful recession, the first-year associate hiring picture at large law firms looks much different than during the glory days of 2007.

The most prestigious law schools still dominate when it comes to placing graduates. But the percentage of 2011 law grads at the nation's elite firms continued a decline that began in 2009. It seems that large firms have yet to regain their appetite for robust first-year associate classes.

The 20 law schools most popular with hiring firms in 2007 sent a combined 55% of their graduates to NLJ 250 firms — the nation's largest by attorney headcount. For the class of 2011, that percentage was 36.

The National Law Journal queried hiring partners at four NLJ 250 firms about their summer-associate hiring outlook and what qualities they seek in new lawyers. The partners spoke on condition of anonymity in order to be as candid as possible about their internal hiring processes.

For prior years Law School Rankings by BigLaw jobs, see:

Listed below are links to weblogs that reference Law School Rankings by BigLaw Jobs:

Are the percentages calculated based on all graduates, or only those graduates reporting employment details? I am a student at one of the schools on the list, and the reported figure is significantly higher than I would have estimated based on my personal knowledge.

So paying $150K to an Ivy league law school gets you a coin flip chance at working in the salt mines for $160K/yr. You are better off pocketing the capital and just working for a living. And the odds are not good enough to take the chance on going to student loan hell if you loose the bet.

Look at Seto's list of where biglaw partners comes from and compare it to who Anziska/Strauss chose to put on their target lawsuit list. I see several schools on the target list which outpeform their US News rank in the biglaw partner measure and show up in the top 75 list at your link -- Chicago-Kent, Brooklyn, St. Johns, Hofstra, NYLS, Albany. Some NY-area schools that were not placed on the target list underperform their US News rank on the biglaw partner measure -- Cardozo and Seton Hall.

There does not seem to be any rhyme or reason for why some schools were targeted and not others. Cardozo and Seton Hall are both currently listing 6 figure private sector median salaries on their website (class of 2010 data) while most or all of the schools on the target list 5 figure medians.

This would be a lot more helpful if it also included clerkships.