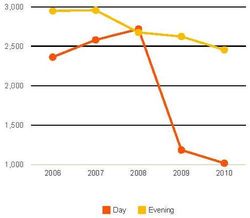 [E]nrollment in, and applications to, part-time programs has declined, but law schools themselves have played a role in that dropoff. Enrollment in part-time day programs fell dramatically in 2009 — the first year U.S. News & World Report began weighing the Law School Admission Test scores and undergraduate grade-point averages of part-time students in its rankings calculations. The council's study appeared to substantiate what legal educators long suspected: that schools were funneling lower-performing students into part-time day programs to prop up their rankings, but curtailed the practice when it no longer offered any advantage. And then there's the rough economy....

Between 2006 and 2010, the number of matriculants in part-time day programs decreased by 57%. Part-time evening programs saw a more modest decline — 17%. Meanwhile, law schools continued to create part-time programs. There were 40 part-time day programs at ABA-accredited schools in 2006 and 53 by 2010. Similarly, there were 55 evening part-time programs in 2006 and 65 by 2010. ... [T]he U.S. News loophole prompted some of this growth — law schools could admit weaker students without compromising their rankings.