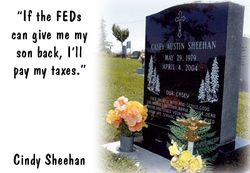 Anti-war activist Cindy Sheehan, who is being sued in California by the federal government, said she has a duty to not pay taxes because her son died in what she called an "immoral" war.

An IRS officer, in a federal filing Tuesday in Sacramento, said Sheehan has refused to provide financial information for the 2005 and 2006 tax years. The filing asks the court to order Sheehan to comply.

Sheehan, of Vacaville, told CNN affiliate KXTV she has not paid federal incomes taxes since 2004 -- and has not disguised the fact.

"I feel like I gave my son to this country in an illegal and immoral war. I'll never get him back," Sheehan said. "And, so, if they can give me my son back, then I'll pay my taxes. And that's not going to happen."

Sheehan drew national attention when she camped outside then-President George W. Bush's home in Crawford, Texas, throughout August 2005 to demand a meeting with the president over her son's death.

Casey Sheehan, a 24-year-old Army specialist, was killed in an April 2004 battle in Baghdad. His death prompted his mother to found Gold Star Families for Peace.

It’s not a secret, and hasn’t been one for about 8 years now, that I am a conscientious tax objector. It’s also no secret that the IRS has been on my case about it recently. ... I made a moral decision to refuse to fund the Empire’s crimes, tortures and wars. I have not been hiding from anybody and am fully accessible and easy to find. ...

I consider that my debt to this country was paid in full when my son, Casey, was recklessly with no regard for his safety (remember the rush to war with the “Army you have” which was not properly trained or equipped?) murdered for the lies of a regime, whose members (Bush, Cheney, Rice, Rumsfeld, Yoo, Wolfowitz, Perle, etc.) roam around the world free and unfettered by threatening prosecutions or persecutions after committing war crimes, crimes against humanity, crimes against the peace, and high crimes and misdemeanors against our own Constitution.

Listed below are links to weblogs that reference Anti-War Activist Cindy Sheehan Refuses to Pay Taxes:

I'm looking in the tax code for the section that allows a taxpayer to not pay taxes by claiming status as a "conscientious tax objector," like Sheehan is doing. This could be great! If I find it, then maybe I'll stop paying taxes, too, because I'm disgusted with waste and corruption from the fifty-year long so-called "war on poverty."

Did you catch the "shell game" with the George Soros connected Alliance for Global Justice at Sheehan's "tax deductible contribution" site that she is using to cheat the government out of tax money for her own benefit? Something in the back of my mind says that she just might be using this money for political purposes. So, Sheehan is not only not paying taxes for herself, she's having the taxpayers subsidize her activism.

Excellent! Mother Sheehan's behavior has been crude and annoying for years, and she's gotten almost universally soft treatment. Now she's up against the IRS, which is a rock that will break her.

Wow these are really coarse, sick comments. This woman lost her son to a war based on lies. For the craven profit of the few, she paid tax money (as did the rest of us) AND the life of her son into a horrific war machine that killed americans and iraqis, pillaged and polluted their lands and drained our coffers and our communities of tax dollars and of family members and left a trail of obscene destruction and innocent iraqi deaths behind.

Only a fearful, small person tries to minimize that and tear down the victim and her very legitimate response to the hellish war-machine that commits atrocities in our name, with our money, and our children.