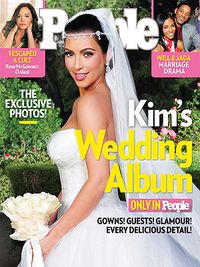 Progressives don't care about her sex tape. They do care that she makes so much money.

Poor Kim Kardashian. Well, poor may not be the right word. By all accounts—especially those she televises for her reality shows—Ms. Kardashian manages quite comfortably on her income. According to the New York Post, that includes as much as $17.9 million that she raked in for her well-publicized August wedding to NBA star Kris Humphries.

Public morality can be a tricky thing, however, and apparently Ms. Kardashian has now crossed a line.

It's not her split from Mr. Humphries only 72 days after their wedding, which raised questions about whether the marriage was simply one big publicity stunt. Nor was it the earlier sex tape that earned her celebrity and riches. Only a prude would object to that.

No, Ms. Kardashian's sin is this: She pays what she owes in state taxes under California law, instead of the much larger amount that some self-appointed advocacy group thinks she ought to be paying.

The organization is called Courage Campaign and its website reveals it to be a California mélange of activist groups and labor unions. In a video that presents Ms. Kardashian in some of her more conspicuously consumptive moments, Courage Campaign claims that while Ms. Kardashian made more than $12 million in 2010, she paid only one percentage point more in taxes (10.3%) than a middle-class Californian (9.3%). ...

It's tempting to dismiss this campaign as the work of a bunch of California crazies. The problem is that its assumptions about wealth and taxes extend far beyond the Golden State. Indeed, they have calcified into an orthodoxy that defines the Democratic Party. ... They will not be swayed because they are not being driven by their economics. They are being driven by their conception of immorality: the idea that millionaires have more than they should—and that any wealth they have is not something they have earned but something the state has allowed them to keep. It says much about the progressive Puritanism of our age that what these folks really find most sleazy about Ms. Kardashian is not her sex tape or her marriage, but that she's unembarrassed about making money.

Many years ago in these pages, Irving Kristol famously wrote that the liberal paradigm "has led to a society where an 18-year-old girl has the right to public fornication in a pornographic movie—but only if she is paid the minimum wage." Today, women like Ms. Kardashian make much more money exercising that right. The only question progressives ask is about the size of the government's cut.

Listed below are links to weblogs that reference WSJ: Taxing Kim Kardashian:

Why does anyone care about a no talent bimbo like Kim anyway? Even Paris Hilton, the person who helped Kim gain reality tv stardom is also a no talent ditz. But her father is well known... better than nothing I guess, but not much. Neither one of these girls would be note worthy if not for their parents hadn't given them trust funds filled with and by blood money! Kim's father is dead..old news. And his claim to fame is helping a man get away with murder?!? So why do all these "sheeple" care about the daughter of a man that freed a killer? She can't sing, she can't dance, she can't act (except like a spoiled bitch). Where's the substance?? Chris H. was right to run for the hills!

Someone who makes millions of dollars should be in a much a higher tax bracket (30% at least, if not more) than someone who actually CONTRIBUTES TO SOCIETY like teachers, doctors, and philanthropists. The problem is with the society that practically deifies someone whose only asset is her ass! None of the Kardashian women were even attractive until they spent boatloads of money on plastic surgery. Our society is the problem here. The sheeple are the ones responsible for enabling someone like this to make the money this article is contesting!

No one has a constitutional right to a fair wage.
However, the Constitution does grant us the right to live.