Tax Rates, Inequality and the 1%

This news caused quite a stir, feeding the left's obsession with inequality. Washington Post columnist Eugene Robinson, for example, said this "jaw-dropping report" shows "why the Occupy Wall Street protests have struck such a nerve." The New York Times opined that the study is "likely to have a major impact on the debate in Congress over the fairness of federal tax and spending policies."

But here's a question: Why did the report stop at 2007? The CBO didn't say, although its report briefly acknowledged—in a footnote—that "high income taxpayers had especially large declines in adjusted gross income between 2007 and 2009."

The larger truth is that recessions always destroy wealth and small business incomes at the top. Perhaps those who obsess over income shares should welcome stock market crashes and deep recessions because such calamities invariably reduce "inequality." Of course, the same recessions also increase poverty and unemployment.

The incomes that top earners report to the IRS have long been tightly linked to the ups and downs of capital gains. ... 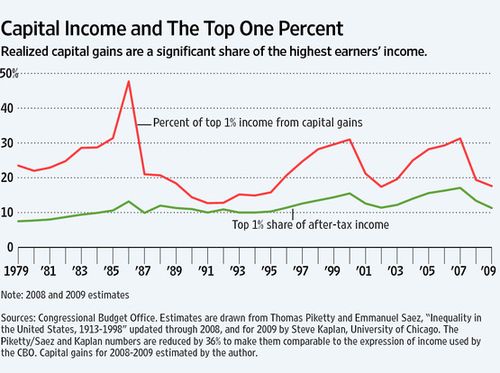 In short, what the CBO presents as increased inequality from 2003 to 2007 was actually evidence that the top 1% of earners report more taxable income when tax rates are reduced on dividends, capital gains and businesses filing under the individual tax code.

Listed below are links to weblogs that reference Tax Rates, Inequality and the 1%:

Bring me a tissue, please. I think I'm about to start weeping. Yes, I'm a Liberal troll stopping by to drop off a bit of snark.

All this carping about losses is of little interest to the multitudes of everyday people, most of whom are not sophisticated enough to know the meaning of the term, whose net worth after a lifetime of work, thrift and social responsibility remains (if not negative) either break even or just barely over the mark where they may live long enough not to be cast into the Medicaid net.

In any case the number with generational wealth to pass to their children and grandchildren is pitifully slight, certainly not sufficient to afford the professional fees of a tax accountant, much less a portfolio manager.

Meantime. income (which as you realize if a very different animal from net worth) is taxed, not in a way that will affect accumulated net worth but just enough that additions to net worth during a single taxable year are somewhat smaller than they might otherwise be.
(But dollars paid into taxes are just that much less available for job creation? Gimme a break.)

Sorry to have disturbed your comments thread. I'll be moving on now...

The guy from CATO did a pretty good job of explaining his point of view, but for some reason didn't notice the answer to his question about ending the CBO period of analysis in 2007. Here's what is said by CBO in the report:
"To assess trends in the distribution of household income, the Congressional Budget Office (CBO) examined the span from 1979 to 2007 because those endpoints allow comparisons between periods of similar overall economic activity (they were both years before recessions)."

CBO stopped the analysis at 2007, because (like 1979) that year preceded a recession.

One could argue that the era of "stagflation" including 1979 isn't comparable to the "bubble" that preceded the recent recession, so CBO's stated reason isn't valid.

And, of course, like Reynolds noted there are several intervening changes that make the comparison between 1979 and 2007 invalid.

Reynolds has made the best argument I've ever read for taxing capital gains at ordinary income rates.

Liberals lying to push a known false policy objective? Say it ain't so!

And don't forget the changes in tax code in the 1980s that moved income from corp to personal! A study linked by McArdle a while back said this actually explains most of the difference iirc.