My tax bite is roughly 10% to California. For every dollar I make, ten cents goes to Sacramento. (Yes, I get a benefit from that in that state income tax is deductible on federal tax. However, because of the Alternative Minimum Tax even that benefit is capped.) For the past few years I’ve considered if I could move my business to a friendlier environment. Earlier this year, I decided to do so.

I’ve sold my house in Irvine, and am in the process of purchasing a home in the Las Vegas area. I will be in a much friendlier business environment, with a lower cost of living. The home I’m purchasing is nearly double the size of my current home and costs almost 50% less than what I sold my current home for.

There comes a point where decisions are forced on you. With the growth of my business, I looked at possibly hiring another tax accountant in 2010. When I ran the numbers, I found that I would lose money by hiring a productive tax accountant. That’s because of all the regulations and costs that I would immediately incur if I had an employee. I’m not stupid: If I lose money by hiring someone, I’m not going to do it.

Yet my business was (and is) growing, and I had to do something. ... As of a week from now, I will have executed my own Escape from California.

Russ doesn't say that taxes are the only reason he is leaving California. He is saying that high taxes are a significant part of why California is business-hostile. When things are bad enough to drive a growing business from the perfumed air and divine weather of Orange County to the desert wastes of Nevada, that's saying something.

The IRS today released updated statistics on the number of taxpayers moving to and from each of the fifty states.  Tax Foundation data is here. Here are California's net migration data: 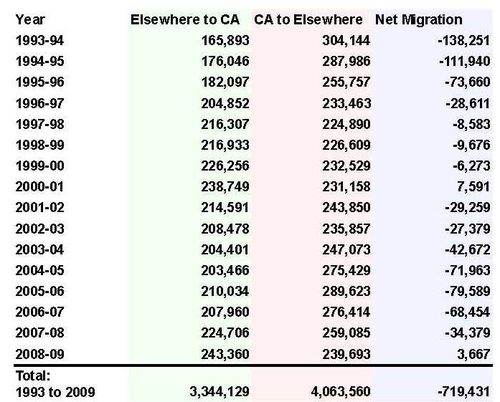 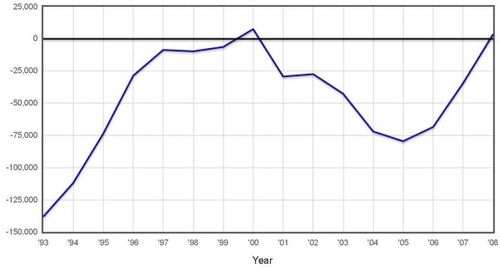 Listed below are links to weblogs that reference Tax Practitioner Flees California for Nevada:

» California Has Lost Over 720,000 Taxpayers $48 Billion of AGI From US Migration From 1993-2008 from Taxable Talk
My move to the Silver State has gotten some comments from two other tax bloggers, Joe Kristan (Roth Tax Updates) and Paul Caron (TaxProf Blog). In the TaxProf Blog post, theres a link to statistics on migration from within the US to and from Cal... [Read More]

Good riddance. Don't come back and please give up all your SoCal clients too.

I can just hear some individuals saying "well, here's another case of the grass is always greener, etc", but I can fully understand this gentleman's reasoning. I too, live and practice in a state that is not as bad as California, but is close and have a short sighted governor who is not business friendly. The frustration eventually prevails and you are forced to make a decision.

"I looked at possibly hiring another tax accountant in 2010. When I ran the numbers, I found that I would lose money by hiring a productive tax accountant."

Too bad for Russ Fox and that tax accountant who lost out on a job from him.

While California is driving away jobs and businesses with taxes and regulations, jobs in all states are being hampered by mandates from Washington. Where do you go when Nevada becomes unprofitable?

Some of my clients became part of the net migration to California. They still hire me to do their returns. Part of the reason is that my fees are lower than what they would pay locally.

Nevada is a fine place to live, especially with housing available at ridiculously low prices. I would consider a move there, if my kids and grandkids did not live less than 10 miles from my current office. Must be nice not to have roots.

As though California taxes weren't bad enough, here's this, but the tax is only on "the rich," taking a chapter out of Obama's class warfare book. And, if that's not enough, without a tax increase, the governor's threat of program cuts are to things that people need and are a legitimate part of goverment rather than to waste in social programs and high union salaries and pensions.

any way to see the income levels of the people leaving Ca vs the people going to CA? it would be interesting.

What the numbers don't tell us is WHO moved in, and who moved out (other than the fact they are "tax payers"). One might reasonably assume that the highly productive people are long gone, having fled years ago.

Not to mention it only measures those who pay taxes - not the inflow of non-tax paying individuals.

Add one more to the list, and I am not even a business owner. I still have a few years to go working in California, but I live within an hour of the AZ/CA border and we have just bought residential property in AZ to move all possible assets to. I sold my business in California and still recieve income from that sale as I invested and use the investment to supplement my income. All future payments from that investment will now be paid to my address in AZ. I am also looking into transferring all real estate titles to some sort of holding company based in AZ as I have rentals in CA and hopefully that income can go to AZ as well.
This place sucks if you have any money at all. I won't even start on trying to own vehicles, those titles are going to AZ as well...

Shhhhh, don't tell anyone -- let me sell my house first. Gonna get the hell out of high taxed CA, who wants to subsidize everyone but the taxpayer. Oh, but I'll be close enough to come use its services on occasion: beaches, Disneyland, etc, and laugh at all the suckers who continue to vote in people and pay for the privilege of supporting something like AB131. Enjoy the stupidity; you're paying for it!

In most cases businesses can absorb taxes (they are passed on to customers...get it?) but the delays, arbitrariness and multiple (Federal, State and Local)demands for licensing, permitting, E.E.O.C. regs, healthcare costs, insurance and other regulatory requirements destroy the incentive to expand. In Kalifonica it's just more so...so much more.

This tax practitioner should have used the provisions of the tax code to his benefit like all of the other allegedly part time CA residents. He could have kept his Irvine home, live in it for no more than 6 months per year, established a new "Primary" residence in NV and performed all of the tax code chicanery to completely remove his 10% California tax liability. I read a checklist of items that the CA Franchise tax board uses when they go after those people who attempt to claim a different state as their primary residence. Any tax practitioner worth his salt should be able to figure it out, buy a dumpy little foreclosure condo in Vegas, and give the bird to the golden state while enjoying it's beaches and benefits without the taxes.

Businesses and productive taxpayers are leaving California, and public employess, illegal aliens, and welfare recipients are moving to and staying in California. The tax base simply cannot support the government. Victor Davis Hanson frequently illustrates this by describing his farm town. Taxpaying, employing, and regulation-complying restaurants are closing down, only to be replaced by lunch trucks and roadside stands with no plumbing and trash collection. State regulators find no profit in finding and citing unregulated food sellers that leave raw sewage and trash on the roadside and drive away. Meanwhile, the lack of water for the farmers because of environmental regulations leave migrants with no jobs.

California's government has made California into Guadalajara. And they're proud of what they've done!

I currently reside in Illinois. I pay $10,000 per year now to the state in personal taxes. That does not include taxes for my business. That is not going to happen. My home here in the Chicago area is for sale. This Spring we drop the price 20k per month till it sells. I am off to more business friendly Indiana.

My question would be what is he going to do with the clients he has in California? Are they going to send him the work to still do? If yes and no - how many will stay with him vs how many will he lose?
Can he pick up the business in NV?

I would have loved to see his numbers. How can hiring a person (to bring in more business) net you a loss? What exactly does Calif. impose that other states dont?

Um, you know we're not all desert wastes here in Nevada. If you and/or Russ Fox made a visit up here to Greater "Rentacarville" (Reno/Tahoe/Carson City/Gardnerville), you might eat those words.

The view from San Diego, CA

I started my one man (me) handyman business in 1996. By 2000 I had more business than I could handle, so I looked into what it would take to hire an extra guy or two. I found I would have to hire at least two to break even with the additional regulatory expenditures, and then would have to hire a book keeper so I could schedule and work, which would require at least another two guys to cover the book keeper's pay. There wasn't THAT much extra business. So now I still work on my own, and hire another guy on occasion for jobs that require an extra set of hands. There are plenty of skilled unemployed and underemployed guys around to fill in.

The biggest loss is not US citizens leaving CA for NV or TX.

The biggest loss are highly skilled Asian workers in Silicon Valley returning to Asia. CA effectively squeezes them out of the US altogether. And then people complain that there are too many unsold houses in CA.

I noticed the numbers of those migrating out of California went way up when Bush was President and Arnold was Governor and now that Obama is President and Brown is Governor, the numbers are going back down. No coincidence there. Under Republican regimes, Californians suffered devastating looses of social services, disparatelt affecting women, children, minorities, and gays, who had to flee to other states to obtain the social services that they desperately need. Now, with the Republican regimes long gone, disaffected people know it is safe to remain. Of course, we can't talk about that.

Vinny B.: are you sure you understand which side of the argument your statements are supporting?