Santa Claus Arrested by the IRS 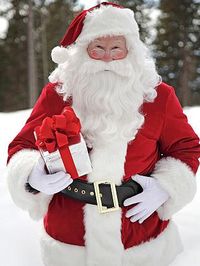 At long last, the notorious tax cheat, Santa Claus, has been apprehended.  He has been living in a foreign country for the last 50 years and during that time he has not filed his US taxes even once.  It has become clear, however, that he has run a lucrative business at the North Pole and has never reported any of the income.  In addition to criminal tax evasion, we intend to charge Santa Claus with 190 counts of criminal failure to file Foreign Bank Account Reports (FBAR), as we found evidence in his papers that he is operating or has signing authority on bank accounts in 190 different countries.  It is our contention that the fines alone could help us bring billions in revenue into the United States government.

According to United States law, all United States Citizens are required to pay taxes to the IRS and to report any foreign bank accounts.  Failure to obey these filing requirements may result in civil and criminal penalties including imprisonment.

The Obama administration declared that they were very pleased with the news..  ”It is about time,” Obama said from his Hawaiian retreat, “that the United States returned those who have fled the country just because they don’t feel like paying their fair share anymore.”

Listed below are links to weblogs that reference Santa Claus Arrested by the IRS:

Um, I'm pretty sure Santa is not a US citizen. German maybe? Unless he is dropping a taxable gift on someone (certainly not me), then I think he's alright by the US.

Thanks for sharing this post. It appeared originally at http://isaacbrocksociety.com/2011/12/24/breaking-news-santa-claus-arrested/