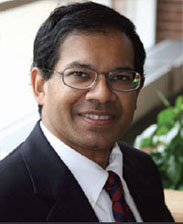 Joshua Scaggs, 23, has been charged with attempted murder and two counts of aggravated battery alleging he slashed the throat of Anurudha Udeni Dhammika Dharmapala, 41, of Champaign. He is a professor at the University of Illinois College of Law specializing in law and economics, tax policy, public economy, and political economy. ...

A male witness told police the men were both seated in the waiting area when one man suddenly jumped up and shouted that this was his country and attacked Dharmapala. The attacker, later identified as Scaggs, then grabbed Dharmapala around the neck and appeared to be choking him. He then forced the victim to the floor. The witness intervened by pulling the attacker off Dharmapala. The witness then noticed that the attacker was holding a utility knife and the victim was bleeding.

What a horrifying tragedy. My prayers for Professor Dharmapala's recovery.

This is horrible, and the professor is in my prayers, too.

Attempted murder is attempted murder, and the presumed motivations of a hate-crime don't change anything. Some people are just mean or crazy.

This news is as disgusting as it is shocking.

The attack is just appalling. But the good news is that Dhammika has been released from the hospital and says he is "recovering faster than anticipated."

He should be charged with spreading racism as well. The phrase "this is my country" clearly show that the attacker did it with racist intentions.

But there is at least some good news in that a second individual, who is presumably no less "American" than the others, intervened and perhaps saved Prof. Dharmapala's life.

This is terrible, terrible news. Dhammika, our thoughts and prayers are with you.