WaPo: 70% of Those Subject to Millionaire Surtax = Small Business Owners

Over half of the people who would be taxed under this plan are, in fact, small-business people.” — House Speaker John Boehner (R-Ohio), Nov. 6, 2011

“The question is whether the federal government ought to be raising taxes on 300,000 small businesses in order to send money down to bail out states for whom firefighters and police work.” — Senate Minority Leader Mitch McConnell (R-Ky.), Oct. 23, 2011

The top Republicans in Congress appeared on CNN on different Sundays to make similar arguments against the Democrats’ push to raise taxes on people making more than $1 million — that it would adversely affect small businesses. ...

The Office of Tax Analysis study, which focused on 2007 tax data, ... makes for interesting reading for tax policy wonks. It certainly is a much more precise look at the taxes paid by small businesses. ...

The key to McConnell’s statement is Table 14. That shows that there were 392,000 tax returns with adjusted gross income above $1 million. Of that, 273,000 returns were defined as “small business owners” under what the study calls a “broad definition.” Rounding up, that’s where McConnell gets his 300,000 figure. Table 14 also would support Boehner’s claim that over half the people taxed as millionaires are “small business people,” since it shows almost 70% of millionaire tax-filers meet the broad definition. 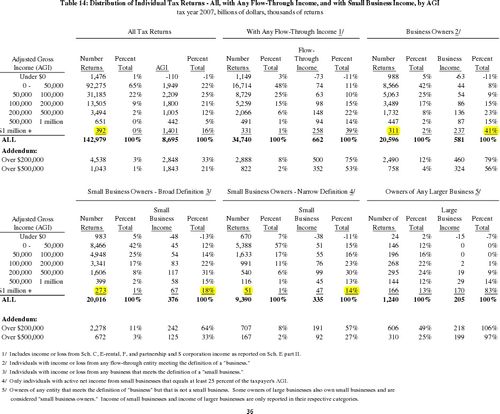 Listed below are links to weblogs that reference WaPo: 70% of Those Subject to Millionaire Surtax = Small Business Owners:

Is this the same issue discussed in September about the definition of "small" including pass-through income?

The facts don't matter son, this is class warfare!

Count me as one of those people - 15 years ago, I was a grad student with $11k/year in income from a summer law clerkship and 90K in student loans, living in a roach-infested DC apartment. After moving home to live with my parents, paying off the student loans, driving a 1992 Ford Tempo through 200k miles, and relentlessly focusing on saving and investing, between my own private law practice; seed money investments in local restaurants that turned out successful; my spouse's small businesses; and rental properties we've accumulated, our gross income hits the million mark this year. Our real-world take-home? Maybe 450k after federal/state/local taxes, property taxes, employment taxes, and then a good chunk of this we have traditionally invested back into the businesses. I live in a nice house, but it's not a "showplace" house. I'm not buying a new car (the 2004 Taurus that replaced the Tempo still runs fine...). I sure would love a corporate jet, but only to avoid the TSA grope-downs. I really can't afford that...

You're totally right. The person making $11k per year like you used too definitely can afford it instead.

Datao - no, you are not counted in that millionare group because your adjusted is below 1 mill

As I am sure you read, the above chart was based on AGI, not gross income. As a result, you likely would not qualify for the so-called millionaire surtax.

Lies, damned lies, and statistics: Here again, the Republican leaders conflate the NUMBER OF EMPLOYEES and the REVENUES as they pass their objections off as protection of "small" business. You could make a BILLION DOLLARS and, as long as you have 499 or fewer employees, you are a small business. Get real.

If Obama can read a table chart like the one above (no proof of that, but let's take it as a given) then his tax plan is designed to hurt employment. How else can that plan be understood?

On the other hand, according to the 4th block of Table 14 the 273,000 returns having AGI over $1 M amount to only 1.4% of all small business returns, which number 20 million. Only a very small fraction of all small businesses would therefore be impacted by the surtax. Boehner and McConnell: hoisted with their own petard.

"Real anon" - when I was making 11K per year, it did not even cross my mind that I should be demanding money from anyone else that I did not myself earn, merely because I "needed" (or, better, "wanted") more. I wasn't raised to expect that people who had more than me were in reality my own personal wage-slaves. Instead, I adjusted my lifestyle to fit my then-existing budget. I didn't go on fancy vacations, used a hand-me-down TV, didn't buy a lot of clothes, and cooked my own food pretty much from scratch (a $20/week food budget). If I went out, I didn't drink; my exercise involved local parks. A frugal lifestyle may not be thrilling, but it wasn't pig misery either.

I can assure you that I have already passed by investment opportunities because, after taxes, the risk-reward benefit would not have been worth it. We have been looking at a new opportunity, and we are looking to HQ in TN vs IL due to the tax bite. But hey, I've only made profitable investments that have created jobs so far. Let's give it to the government to spend instead, not on the "poor", but on the legions of parasitic bureaucrats that suck on the government teat. Because that really creates economic growth. Just ask Obama.

So, I wonder if these 222,000 "broadly defined" small business owners are what everyone has in mind when Boehner and McConnell talk about the impact on small business.

Really now, how useful is that "broad definition" but to obscure the truth, and make a political point?

We must remember and articulate that raising taxes is a false choice that does not address our core problems.

The core problems we face are a bloated government that spends recklessly and a government that legislates and regulates beyond the consent of the governed and its constitutional limits.

Oh yeah, that and the fact that the statists have declared war on this country, and are being supported by the leftist mainstream media.

What is really astounding is that all of the leftist arguments for taxing the rich lead by Obama and the MSM boil down to a simple thesis: "you earn it, we want it, because you have too much"........yet they never define how much is enough.

Reagan offered and delivered prosperity for the masses; Obama offers "shared sacrifice" and misery for more Americans (and has a solid track record of delivery with more than 15% of the Country on some form of Government assistance/food stamps). He's not making an argument that he can revitalize the Middle Class; He's campaigning on "punishing" the prosperous, which in no way, shape or form will enhance the fortunes of the "99%".

It's a sad, Alinsky-driven effort supported by the media echo-chamber that will ultimately ruin our Country. Do we really want to be Italy or Greece? He won't even be able to afford the twin teleprompters when that happens...........

I can assure you that I have already passed by investment opportunities because, after taxes, the risk-reward benefit would not have been worth it.

the fact is that a tax on any one segment of society is immoral and wrong . you do not raise one mans house up by tearing anothers down. the truth is there is not enough money in taxing a small segment of the population.its a simple math problem you cant spend forty percent more than you take in for long if you want to survive.add a trillion dollar new entitlement,exploding medicare and soc sec costs and add inflation by 2015 we will not be able to make the intrest payments on the debt at that point 100% taxation wont sustain us. there is not enough wealth in the entire world to cover the debts already on the books now soon no one will invest in the U.S. we keep debasing the dollar to hold down intrest rates because when they rise just a couple of points we have to pay a premium to borrow money from outside the us.china owns over a trillion japan close to a trillionare we supposed to cuddle up to the saudis next,maybe our new libyan friends ? if we dont get our budget in order now there will be no tommorrow!

To all you marxists out there: Wealth is not distributed it is in fact earned. jealousy, envy and greed are not american values.when you go to the grocery store do they ask you for an income statment before you get your milk? This idea that people are taxed at different rates is wrong, when you tax income you prevent wealth.If you wanted people to suceed ,then you would punish failure and reward sucess, not the other way around