The Patient Protection and Affordable Care Act and the Health Care and Education Reconciliation Act were signed into law in March 2010. Among the credits contained in this legislation was the Small Business Health Care Tax Credit. In general, the Credit is available only to small employers who pay at least one-half the cost of health insurance coverage for their employees. The Credit was designed to encourage small employers to offer health care insurance. ...

The Congressional Budget Office estimated the Credit would cost $37 billion over 10 years and that taxpayers would claim up to $2 billion of Credit for Tax Year 2010. ... The volume of claims for the Credit has been low despite IRS efforts to inform 4.4 million taxpayers who could potentially qualify for the Credit. According to the IRS, as of mid-May 2011, just more than 228,000 taxpayers had claimed the Credit for a total amount of more than $278 million. Among reasons given by industry groups and professional organizations for the low volume was the time and effort required to claim the Credit. The IRS plans to conduct focus groups to determine why the claim rate was so low.

Update: Joe Kristan notes that the "IRS is just baffled as to why employers might be passing up this tax break. ... Hey IRS, focus on this: 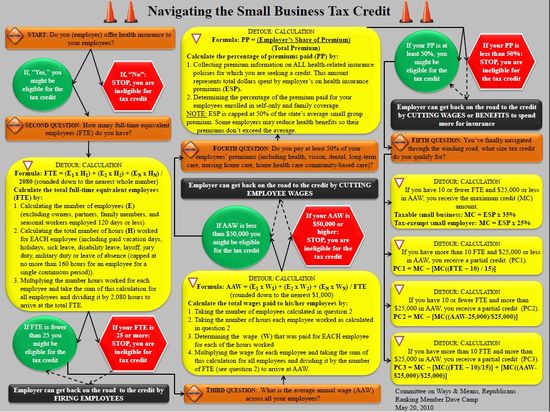 This should give pause to Congresscritters and experts who think that they can nudge us all into optimal behavior (whatever that means) by carefully-calibrated and phased-out targeted tax benefits. But it won't."

Listed below are links to weblogs that reference TIGTA: Only 14% of Eligible Small Businesses Claim ObamaCare Tax Credit:

» It's complex and confusing. Why isn't it more popular? from Roth & Company, P.C.
The TaxProf Blog has this headline today: TIGTA: Only 14% of Eligible Small Businesses Claim ObamaCare Tax Credit The IRS... [Read More]