The 99% and the 1%: Income Mobility and Income Inequality 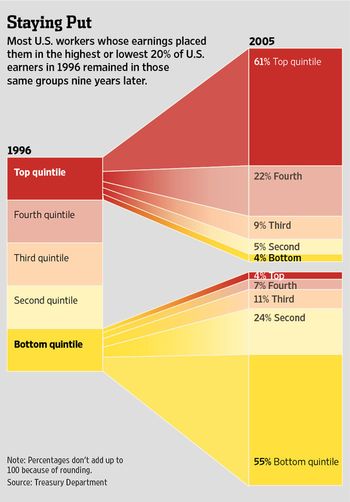 The Occupy protesters' rallying cry—"We are the 99%"—drives home their view of a chasm between them and the top-earning 1% of Americans. But just how set are such categories? How often do people rise to the 1% or drop back to the 99%?

The answers, researchers say, are complicated. Americans frequently move up or down in income rankings. Yet there is evidence they are doing so less often than they used to, and less than residents of Canada and Western Europe.

"Yes, the U.S. has a lot of mobility," says Sheldon Danziger, an economist at the University of Michigan. "But we also have a lot of inequality, and particularly a lot of stickiness at the top and at the bottom."

Then there is the question of how important relative mobility—a measure that compares one person's income with everyone else's—should be in looking at Americans' economic opportunities.

"Folks on the political right tend to favor an absolute measure," says Erin Currier, manager of the Pew Charitable Trusts' Economic Mobility Project, a research group. "They focus on rising tides lifting all boats. Folks on the left tend to focus on relative mobility, and equality of opportunity." ...

During George W. Bush's presidency, the Treasury Department released figures, based on tax returns, that demonstrated the complexity of the issue. According to the report, which tracked taxpayers from 1996 to 2005, just 40.3% of those in the top 1% in 1996 remained there nine years later. But most didn't fall far: 86.5% remained in the top 20%. Meanwhile, more than half of those in the bottom quintile in 1996 remained there nine years later.

Listed below are links to weblogs that reference The 99% and the 1%: Income Mobility and Income Inequality:

I'm retired from the Military and I have paid taxes most of my life.
The key to this is that I have pay taxes at least twice if not more
on the things I buy after the government has taken taxes out of my pay
check. I beleive that the fairtax would be better for us because we
would not pay taxes on our retired pay and would receive the prebate as
well. I would like to see more states getting in the fairtax arena. If we could all get together and get the goverment topass the fairtax then everyone that does not pay tax would start when they bought something new.

"Folks on the political right tend to favor an absolute measure," says Erin Currier, manager of the Pew Charitable Trusts' Economic Mobility Project, a research group. "They focus on rising tides lifting all boats. Folks on the left tend to focus on relative mobility, and equality of opportunity." ...

I completely disagree with this interpretation of right/left economic focus. The "rising tide" spoken of by conservatives is the RESULT of individuals taking advantage of the equality of opportunity that allows the pursuit of success to anyone who has the passion and the drive to seek it. The left believes that no one should have too much nor too little; rather that all (except themselves, of course) should compress somewhere in the middle by more equal distribution of the wealth garnered by producers.

I'd prefer to see tracking of the mobility of the SECOND generation, because: (1) with respect to the highest two quintiles, it's easier to keep and pass on to heirs than to earn; and (2) the lowest two quintiles are probably populated by (i) the un- or inadequately-educated, or by unskilled immigrants, who will not themselves change status but whose children may/should attain higher status, and (ii) first-time earners who themselves should move up with greater age and experience.