The 99% and the 1%: Income Mobility and Income Inequality

Tax Policy Blog, Never, Ever Trust What the IRS Says:

That's our friend Paul Krugman talking about us, presumably, and the sources we use to show there is actually a great deal of income mobility, both up and down the economic ladder.  For instance, the table below, from this report based on IRS data, shows that about 60% of households that were in the lowest income quintile in 1999 were in a higher quintile in 2007.  About 40% of households in the top quintile moved to a lower quintile over this 9 year period. Yes, the biggest chunk moved to the next quintile over, but about 1/3rd of those in the lowest quintile moved to the middle quintile or higher.  About 6% moved all the way from the lowest to the highest quintile!

Over time a significant number of households move to higher or lower positions along the income distribution. As a result, public policies such as income taxation and income redistribution affect “classes” of people differently over each person’s lifetime. In addition, income mobility muddies the picture of income inequality derived from a simple comparison of income quintiles from different years because such compari sons incorrectly implicitly assume that each income quintile contains the same households over time. 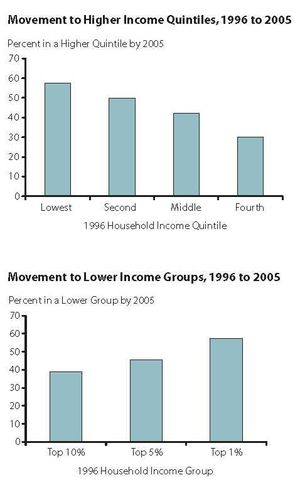 Listed below are links to weblogs that reference The 99% and the 1%: Income Mobility and Income Inequality:

» The 1 percent are also the 99 percent from Roth & Company, P.C.
The Tax Policy Blog makes a too-often overlooked point about "the rich" at the top of the income scale --... [Read More]

Agreed FV Tribune. Of the 6% who moved from the bottom to the top, what portion consisted of trust fund babies graduating from law or business school (with no student debt to boot)? More demographic data please.

There is some income mobility here, but this chart does not make me optimistic. Notice that the top 1% was the "stickiest" category (with 90.5% staying in the top 1% from 1999 to 2007). In every other category more people moved down than the ladder than moved up (e.g., for those in the 2nd quintile in 1999, 32.2% moved down to the lowest quintile while only 17.3% moved up to the 3rd quintile). This chart is also almost useless without demographic data. If most of the lower quintile taxpayers were very young in 1999, then we would expect (and hope) that they had more income by 2007 as they grew their careers. Similarly, for those in the end of their careers in 1999 we might expect such persons to move down in income in 2007 if they were retired and relying mostly on savings. Tax Policy Blog fail.

A just economic system could be recognized by the degree to which those who are willing to work are rewarded fairly for their contributions. When the number of ways provided for circumventing the system expands, injustices will obviously increase. If each existing law and regulation were reviewed from the simple standard: "Is this fair to everyone?" perhaps our system could change to the extent that complaints would decline.