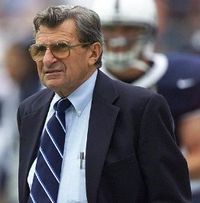 New York Times, Paterno Passes On Home to His Wife for $1:

Joe Paterno transferred full ownership of his house to his wife, Sue, for $1 in July, less than four months before a sexual abuse scandal engulfed his Penn State football program and the university.

Documents filed in Centre County, Pa., show that on July 21, Paterno’s house near campus was turned over to “Suzanne P. Paterno, trustee” for a dollar plus “love and affection.” The couple had previously held joint ownership of the house, which they bought in 1969 for $58,000.

According to documents filed with the county, the house’s fair-market value was listed at $594,484.40. Wick Sollers, a lawyer for Paterno, said in an e-mail that the Paternos had been engaged in a “multiyear estate planning program,” and the transfer “was simply one element of that plan.” He said it had nothing to do with the scandal....

Experts in estate planning and tax law, in interviews, cautioned that it would be hard to determine the Paternos’ motivation simply from the available documents. It appears the family house had been the subject of years of complex and confusing transactions.

Lawrence A. Frolik, a law professor at the University of Pittsburgh who specializes in elder law, said that he had “never heard” of a husband selling his share of a house for $1 to his spouse for tax or government assistance purposes.

“I can’t see any tax advantages,” Frolik said. “If someone told me that, my reaction would be, ‘Are they hoping to shield assets in case if there’s personal liability?’ ” He added, “It sounds like an attempt to avoid personal liability in having assets in his wife’s name.”

Two lawyers examined the available documents in recent days. Neither wanted to be identified because they were not directly involved in the case or the property transaction. One of the experts said it appeared to be an explicit effort to financially shield Joe Paterno. The other regarded the July transaction, at least on its face, as benign.

Listed below are links to weblogs that reference NY Times: Tax Angle in Joe Paterno Scandal?:

Who is this Frolik and what is he talking about? First, I believe PA has entireties protection, so this move would NOT help with asset protection. Second, I can't imagine that JoPa, who other reports say is in line to collect $500K/year in pension is worried about "government assistance programs" Third, Frolik has "never heard" of splitting assets for tax purposes? I am sure that any competent PA lawyer could provide many reasons for such actions. One of the first that comes to my mind is a QPRT. As JoPa's wife is 13 years younger than he is, a QPRT would be much more likely to be successful if she were the only owner. Seems like Frolik just wanted to be quoted in the NYT, and the NYT wanted an angle on the story - very poor reporting.

There are enough reasons to believe JoPa may not have acted appropriately, but this is a non-story and the NYT should be embarrassed by it.

The New York Times is beyond embarrassment. Note the part at the end of the article where an attorney working on the transaction had the same last name as Sue Paterno's maiden name. What was the news value in bringing that point up, especially given the fact that they then state they were unable to determine if the lawyer was any relation to Mrs Paterno? This is somewhere between piling on and journalistic malpractice.

Out here in community property land, it's difficult to think like a Pennsylvania lawyer. We might have spent 15 minutes in Property class on "tenancy by the entireties," but most of the class was absent that day, one way or another.

Yes, Joe is 13 years older than his wife, but from accounts of how she drives when pursued by the media, can we be that sure she will outlive him? If he is the survivor, and a judgment debtor, where does that leave their kids?

Quitclaim deeds are favored among those who don't trust lawyers or the legal process, but the usual form of "hillbilly probate" is to add names to deeds, not to remove them. You only do that when you are trying to escape creditors. Sophisticated estate planning would require an LLC owned by a trust established by a limited partnership. Preferably in St. Helena, or some other offshore island. That's not what appears to have happened here.

Who is this guy who never heard of splitting assets for tax purposes? I agree with yooperlaw - this is a non-issue.

Could be a QPRT. Given Paterno's charitable nature, perhaps more likely a CRT so the house (on campus) goes to Penn St. after death. Very doubtful it's related to basic credit shelter planning with portability now and likely to continue. Still, very weird (embarrasing?) for a law professor to have never heard of splitting assets for estate tax planning. That said, could be for creditor protection. Wouldn't blame him if so though. Why should Penn St. be protected by a tort claims act (I assume) and Paternao have to take the financial sword for what is mostly their fault (I further assume)? All of us are sinners, but only some of us draw the lazer hot focus of an enraged country and/or jury due to circumstances largely out of our control.