Cooley released Report One: National Employment, which uses U.S. Bureau of Labor Statistics (BLS) data to vigorously contest claims that there's anything wrong with the employability of law graduates. ...

So excited are legal education defenders by Cooley's discovered datum that Saint Louis University School of Law professor Aaron N. Taylor deploys it in a National Jurist guest editorial titled, Why Law School Is Still Worth It. Taylor writes , "There has been a lot of negative talk about law school lately, but the facts belie the hype. The legal profession has low unemployment rates, lawyers earn high salaries and loans are manageable." Clearly elements in the legal academy are pushing back against legal education critics, and their arguments go beyond sighing over the need for more transparency in graduate survey data.

So has the legal academy found its magic bullet against scambloggers? More like fool's gold. ...

Readers of Report One who visit the BLS's Web site may be shocked to find that its analyses explicitly contradict Report One's conclusions. ...

"Job prospects. Competition for job openings should continue to be keen because of the large number of students graduating from law school each year. Graduates with superior academic records from highly regarded law schools will have the best job opportunities. Perhaps as a result of competition for attorney positions, lawyers are increasingly finding work in less traditional areas for which legal training is an asset, but not normally a requirement—for example, administrative, managerial, and business positions in banks, insurance firms, real estate companies, government agencies, and other organizations. Employment opportunities are expected to continue to arise in these organizations at a growing rate.

As in the past, some graduates may have to accept positions outside of their field of interest or for which they feel overqualified."

(2) There are far more law degree holders than employed lawyers.

The CPS tables and the OOH do track the number of employed lawyers, though they differ by about 25%. I include both because the OOH numbers are the ones the BLS uses to project future lawyer employment. We can compare these to the number of ABA law school graduates over the previous 35 years (2010 grads, page 871), a measure used to gauge the number of available attorneys. 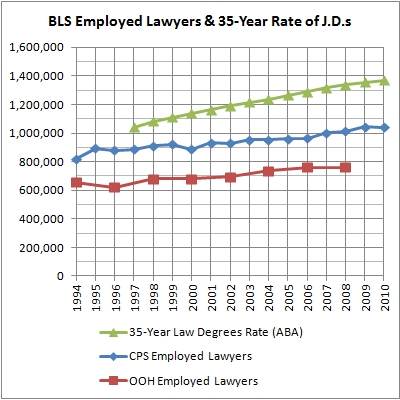 The OOH publishes employment projections for ten years from 2008. These projections assume the economy will return to full employment by then. Between 2008 and 2018 the economy will produce 240,400 lawyer jobs from growth and replacement. In 2010 alone, 44,258 people graduated from an ABA–accredited law school. Even if that number holds, in the ten-year projection period, around 45% of ABA law school graduates will not work as lawyers according to the OOH, and this excludes those who graduate from non-ABA-accredited law schools or who enter the profession unconventionally.

Listed below are links to weblogs that reference The Numbers: J.D. Degrees and Lawyer Employment:

Well, as the old saying goes, "figures don't lie, but liars can figure."

As for solos and small partner-only firms, I know of no stats.

As for the Ntl Law Journal's "Top 250" firms (which likely make up the majority of the six figure jobs that lure nearly everyone into law school) - their total number of lawyers is about...110,000.

It is very, very hard to come up with stats that point to law school being anything other than financial Russian roulette.

With 5 of the 6 chambers loaded.

Might a surfeit if lawyers eliminate the less worthy through natural selection, thereby elevating the worthiness of the profession?

Do either the CPS or the OOH track the number of law grads who pass a bar exam?

Do the employment statistics include solo practitioners and small law firms made up of only owner-partners having no "employed" lawyers?

Gee, too bad it's not the same supply situation for American MDs, perhaps the costs of health care would moderate and American doctors wouldn't get double the income compared to European doctors? But, then again, American lawyers would not have such a target rich population selection for malpractice suits.

If our court system was truly just, many of those college deans and academics would be in jail for fraud. Too bad the law system is stacked in favor of lawyers.

Having a lot more graduates than jobs in the field is not unique to law. For example, the National Science Foundation reports:

- Defined by occupation, the U.S. S&E [science and engineering] workforce totaled between 4.3 million and 5.8 million people in 2006.

- Individuals with an S&E bachelor’s degree or higher (16.6 million) or whose highest degree was in S&E (12.4 million) substantially outnumbered those working in S&E occupations.