A comprehensive new study that profiles 280 of America’s most profitable companies finds that 78 of them paid no federal income tax in at least one of the last three years. Thirty companies enjoyed a negative income tax rate over the three year period, despite combined pre-tax profits of $160 billion. 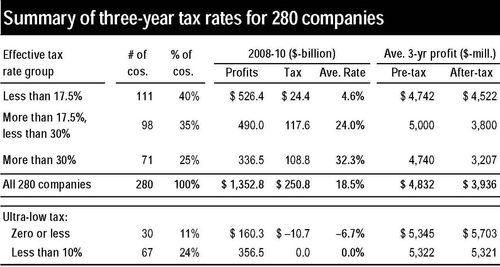 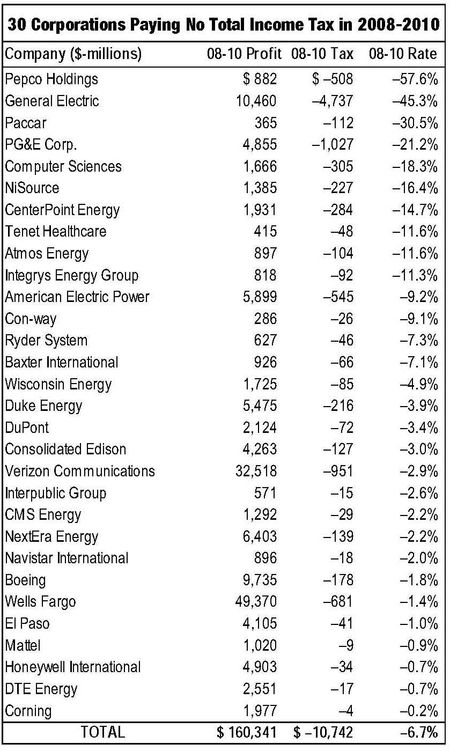 Listed below are links to weblogs that reference CTJ: 30 of Fortune 500 Earned $160 Billion in Profits, Paid 0 Corporate Tax:

It's pretty interesting that at least 78 of those companies enjoyed at one year or more without taxes. Great report and study!

It is an interesting study. Directionally CTJ gets it right. But this study could have been a lot more persuasive, had CTJ spent less time on atmospherics and a lot more time explaining the exact sources of its data, possible inconsistencies in that data from one company to another, possible reasons for such inconsistencies, and how CTJ controlled for those inconsistencies in arriving at the reported results of the study.

(See for a http://www.taxfoundation.org/blog/#27752 for a reality-check.) In essence: If you can get past the bias in the selectivity of the sampling (time and companies) and what it chooses to ignore (foreign income and other taxes)and to highlight (the user of the loophole instead of the creator), doesn't this article make the point that the corporate tax code may need an overhaul? Sadly, all the hype being built in the study and the headlines may only lead some to say: Just impose some kind of a retroactive, real time, asset based tax, whatever, that will produce the "missing US taxes" as opposed to ask why are they "missing".

Can someone explain why corporations claiming capital depreciation is a bad thing? It amounts to deferring taxes until later. The CTJ says "oh, but they can just do this indefinitely." Yes, and thus the cycle of continuous investing in the economy begins. We can do without tax subsidies, but allowing depreciation claims encourages investment.

Just because Bush was for it doesn't mean it is a bad idea.